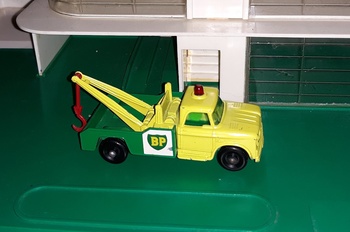 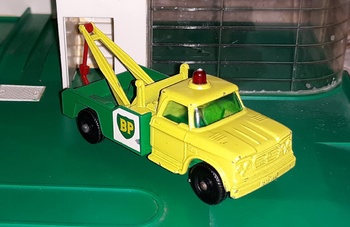 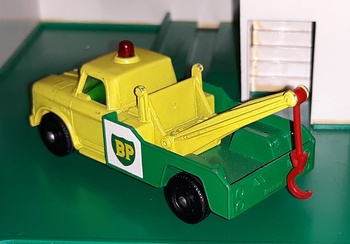 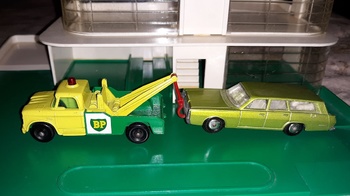 Wrecker is the English word for tow truck and being made in England thus this is called a Wrecker.
This model is known as the MB-13D as it was the fourth MB-13 all of which are wreckers. The Dodge Wreck Truck was in the catalog from 1965-1970 but in 1970 the wheels were changed to Superfast wheels. Luckily they didn't change the paint scheme which are the BP colors.
I should get a Thames Trader Wreck Truck to show the evolution of Matchbox but I don't have one so I will have to tell. The glass enclosed cab was newer addition in 1965 along with a larger size. This Dodge Wrecker is the standard size for 1/64 scale now.
A tow truck is very important for playing with Matchbox cars as it can toy most of the other Matchbox model. Here it is towing a Mercury thus Mercury Moving. The Mercury has a spot on its underside just so it can be towed. Matchbox cars were fairly mundane but it worked.