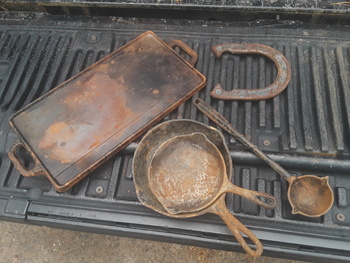 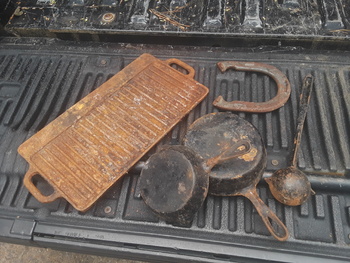 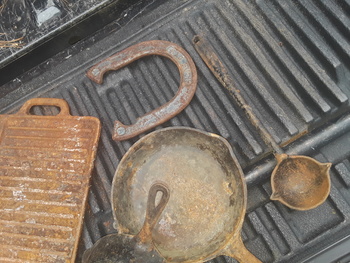 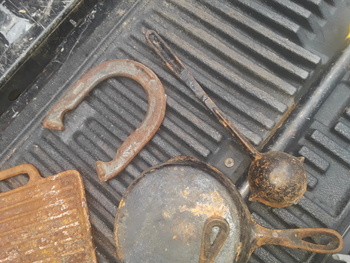 Recovered from the "clean-out house". I don't believe any of these are necessarily old or unusual in any way...but worth saving from the garbage pile anyway, mebbe? ;-) :-) :-)

The 'odd man out' here is obviously the 'throwing horseshoe'. It is roughly 6-1/2"W x 7-1/2" L, probably made to specs of whatever "throwing horseshoes" are supposed to be. It bears the name "BIG BUCK" in the middle along with two "A"s on each end cast into one side, and "CHINA" (origin?) on the other, along with the various protrusions/etc that are commonly found on such items. Mebbe I'll hang it over my entry door (with another authentic horseshoe) because doing so is supposed to bring good luck to those coming and going...??

The two skillets are roughly 7" and 8-1/2" across their widest. The rectangular griddle is roughly 9" x 17" (w/o its handles) and the ladle is 14-1/4"L x 4"W across its pour spouts. I have no reason to think that all four of these are anything other than contemporary "imported" items, probably sourced from a "Harbor Freight" type tool store -- in fact, I also found a cardboard box amongst all the piles of crap that the griddle *came in*, clearly identifying it as such.

STILL, that griddle anyway, might end up to become a useful stovetop accessory if I ever get around to taking a wire-wheel/grinder/etc to it to de-rust it and clean it up...the ladle, too, might end up being useful around the shop as we occasionally melt down scrap organ pipes (made of mostly lead) to create smaller shaped weights for various purposes. The skillets might very well end up as 'Goodwill donations' sometime in the future for somebody else to clean up or whatever...mebbe the griddle will go with 'em as it *would* be an awful lot of messy work to grind that thing clean again (esp. it's 'ribbed' side) when I could just go buy a "new" one just like it 2 blocks down the street from my house right now, for $20 or so...? <LOL>

OH, and for the record these are all pictured "as found", only having been given a 'soft brush' treatment to remove assorted cobweb remnants and other 'surface dirt'.