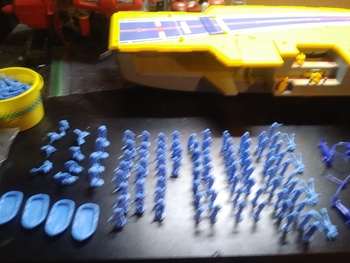 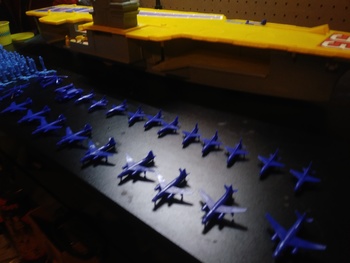 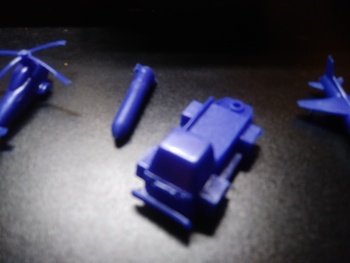 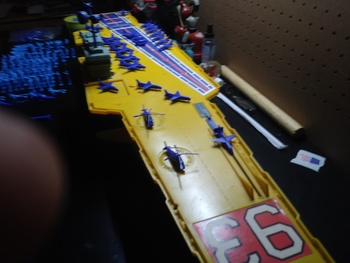 Just landed what seems to he most of the crew/aircraft/accesories that came with the Remco Mighty Matida Aircraft carrier. I posted Matilda before, I received one of these for Christmas '63. It was a 35" Carrier that moved and had operating elevators fore and aft. I picked up a few aircraft and crew before. Thu seems to be a nearly complete set, I can't find one picture on the net showing a complete crew and all aircraft. As far as I can determine all the fuxed wing aircraft are present, 11 F8u's and 9 A3's. The choppers have some damaged rotors, but I have another one. If I can find my glasses I'll try to some rotor transplanting/repair. I paid a little more than I wanted too, but the group had the, the, the....<drum roll please>... .TOW TRACTOR!!!! It also had all four of the HTF swimming frogmen(most of these are probably MIA in bathtub drains), so resistance was futile. The crew is more tne scale for the Remco Barracuda Submarine, way too big for Matilda. I don't let them on board because I'm afraid they'll step on a plane. I've got 75 extra crew and 16 additional aircraft. I can now fill the flight deck and pack both hangars with aircraft (with one even being towed by the TOW TRACTOR!). Got another missle too, I'm not sure how many came with, one picture I saw had 3 missles. I'll trade my extra "tars" for missles or aircraft. I'll trade enough crew to man a destroyer for another tow tractor or some cash. I can't get enough of 'em. I pointed Matilda toward Iran and hit the Nuclear Propulsion switch as a show of force. Ahoy maties, thanks for coming onhoard. 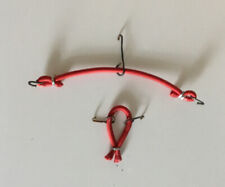 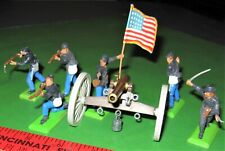