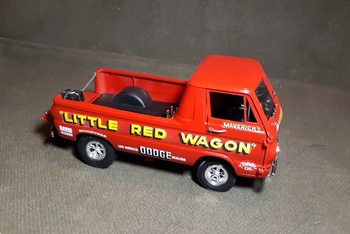 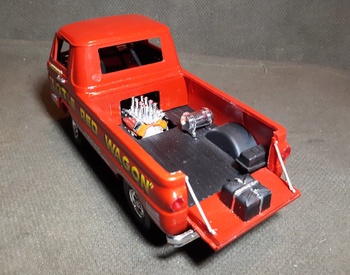 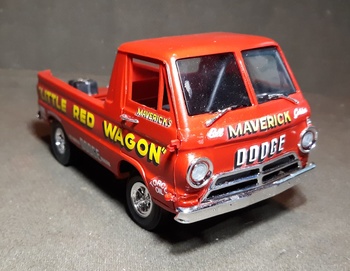 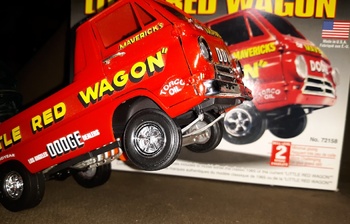 I believe this is the fourth post for the Little Red Wagon. Each though is a different version. The first was a photo of the actual Little Red Wagon, the next was the Johnny Lighting 1/64 diecast model, then an unbuilt IMC model kit in the box which is still unbuilt. Now is the actual built up model. This is the Lindberg version which is a reissue of the the original. Although it does not have the parts to make a stock version.
The original real Little Red Wagon was the original wheelstander dragster. It wasn't supposed to be but dragsters had a tendency to stand on their rear wheels when starting a run. This was really bad at that as the wheels would stay up for the whole run. So to use the technical term they jade it a thing. Wheelstanders had the right idea as they were exhibition racers and got paid just to show up and drive down the track with the wheels in the air. Steering is done with the brakes.
Now as to the model it has a faithful reproduction of a 426 cubic inch full injected motor. And windshield wipers for building the stock version which the wheelstander did not have. Anyway just check out the photos.
Just to back up a bit it is a 1965 Dodge A-100. Plenty more toys to post so do not panic.