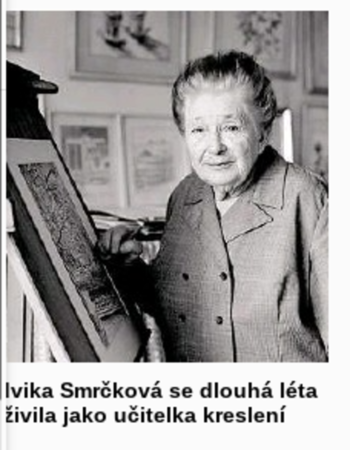 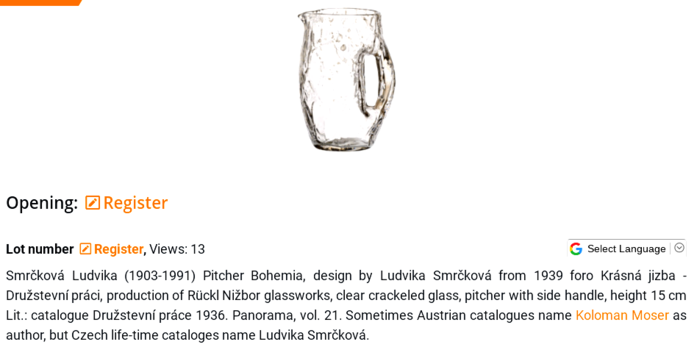 Alfredo my smart friend (RIP) and long term New York collector of Bohemian/Czech glass, was very prolific in his hobby, he had the large glass collection and an extensive reference library to make many informed opinions and attributions. It is still useful to read what he discussed about the bigger glass houses.

This week I came across a document that identified a Czech art glass pitcher as A. Ruckl's Nizbor Glass Plant product, a design by Ludvika Smrckova (1991) . The Ruckl glass company website does mention her role as a designer for Ruckl, and have images to illustrate the info that I used in my All About Glass 1st 2 part article in 2016-17 covering both Ruckl and Kralik, about their long term Bohemia glass history.

I want to include some interesting excerpts here from Alfredo:
For many years, a pitcher has been making the rounds on Internet as having been designed by Kolo Moser. I recall having seen it as such in a book I did not buy. I bought one of the six I own and the seller sent me an Anton Ruckl advertisement of a whole set, pitcher and six glasses, which I lost. In the Passau Museum I found a shelf in a remote room which had two, in tantalizing green and red, together with some overshot pitchers, no identification. And then, perusing through Ricke II, I found it on page 585: production number 3175.
The beauty of this pitcher is that the handle is not attached to the body of the vessel but is actually part of the design, and is hollow. But I do have one pitcher where the handle is not hollow, and a green one where the handle is attached. They all show mold marks and yet most have pontils and a fire polished lip; the large clear one is is cut from the top and does not show a pontil, whereas the milk glass pitcher has a fire polished lip but no pontil. I missed a pink one on E-Bay, and hope another one will come around. I have three sizes: 10", 8", and 7.5 inches. And, of course, the shape was copied by Kralik (or Palda), with a decidedly oval handle attachment.

And another source selling the two pitchers: These crackle finish water jugs are traditionally attributed in design to Koloman Moser and manufacture by Loetz, but are also claimed by Ludvika Smrckova for Ruckl. They have a ground pontil to the base and slightly different heights and density of "crackle". The jury is still out as to which attribution is definitive, but they are still a classic design, no doubt!

Images: 1- Alfredo's collection of pitchers,2- pitcher and description of the design, designer and Nizbor glasshouse, Ludvika with her painting.

My opinion - The truth is in the fine details as well as the pontil and no pontil fabrication, I see shape differences which separates at least 3 of the pitchers. The back row pitchers from the left, clear and blue seem to correspond more closely to the LS design. The time frame is also different as the Ricke example by Loetz (unless that is a mistake) is early 1900 and the Ruckl pitchers are 1939.