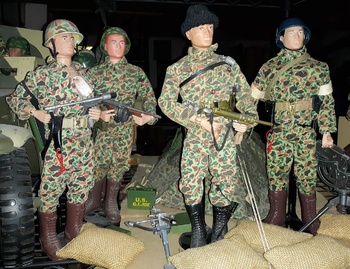 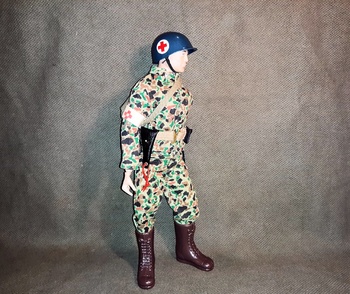 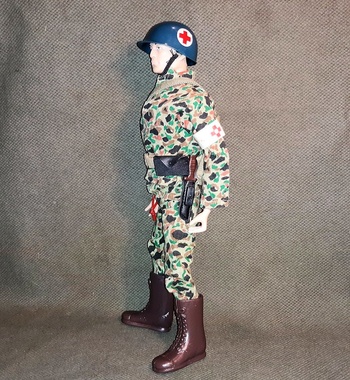 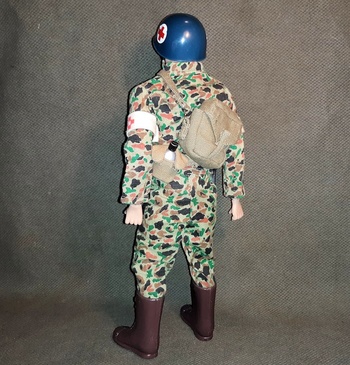 Hasbro did not quite know what to do with the Action Marine figure when it came out. One of the sets was a Marine Paratrooper which was featured on the box cover of the Action Marine. The Marines had a small force of Paratroopers in WWII but abandoned the program after about a year. The Navy didn't have a large amount of transport planes so Marines continued with the landing craft. There were a few other sets like that that were not quite right. One was the Marine medic set. It was a great set but there is no such thing as a Marine Medic. The Marines used Navy Corpsman as their combat medics. So actually the set should have been a Navy set. Now I am not sure if the Navy Corpsman assigned to the Marines had blue helmets but my Navy Corpsman helmet research all blue or gray but no green helmets. So I used a blue Navy helmet and got some repro cross decals. Now the actual helmet had three crosses on them but to be GI Joe correct I went with two. I have more decals so I can always do a more correct one later.
The basic figure is a reissue from the 2000s. The uniform, armbands and medic/corpsman bag are original. The rest I lose track.
Only three more action figures to go. Not counting some others I already had. OK looks like only a few years more worth of action figures. Could be a decade or so.