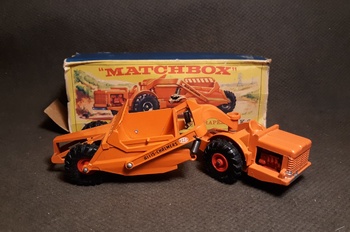 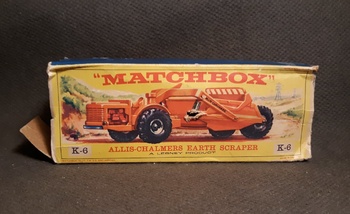 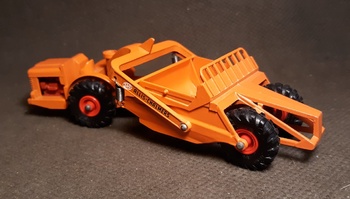 This one really is a major mover this time or at least a model of one. It actually can move earth but perhaps a square foot an an hour.
Now for the exciting narrowing down to when this particular model was made. It was first released in 1961 and sold through 1966 but this box type was only used in 1963 and 1964. After 1964 a box with an insert that held the model was used like an actual matchbox. The model has to sit sideways to fit in this box but someone forced it in so the sides are torn out a bit. It did preserve the model well as it is mint. Mint in a rough box or MIB as they say. The MIB, NMIB, MOC was more of thing before the net where you can post photos. Length on this is a bit under 6".
Now the exciting working feature is that the earth scraping bed lowers by use of finger power. There is a spring on each side that pulls the bed back up. The springs are in excellent condition. Does not seem that finger power was used often due to the stiffness of the springs. It is not the easiest feature to use but still an impressive model.