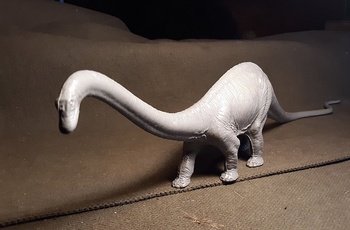 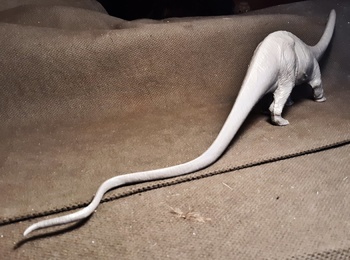 This was one of the earliest Invicta dinosaurs as it was first introduced in 1974. But they were mostly sold in the 1980s. They were the first to be based on scientifically designed dinosaur figures. And they were the only ones to all be made in the same scale even to date. Actually the Marx dinosaurs were fairly realistic for the day but they were just based on paintings. Being scientifically accurate is also subject to change as the current thought is that Diplodocus did not drag its tail and maybe the neck straighter.
Now for some background on Diplodocus. It is known for being the longest land animal and apparently the length was 175 feet which is longer than my tape measure. Weight estimates are 20-25 tons. In photo #4 I have it with the Invicta Wooly Mammoth which was about the same size as an African elephant or perhaps just a bit smaller. Brontosaurus was actually heavier and Brachiosaurus even heavier. There is some argument about using the tail as a whip. Maybe but that might have also injured the tail. Plus it was big enough to use its feet as a weapon.
This is 21" long which makes it fair sized for a toy. I used my new tape measure to find the length.