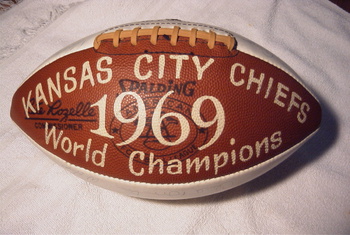 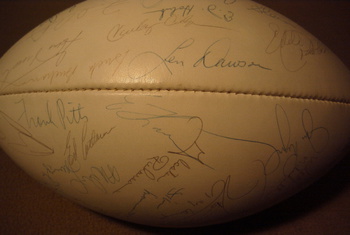 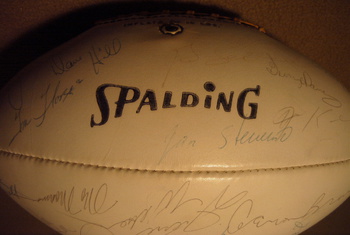 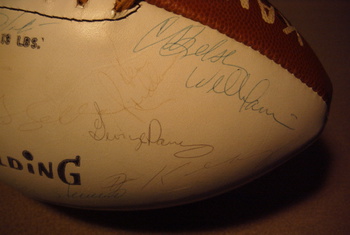 This is the real deal and I have definitive proof all signatures are legit. My Dad owned Kansas City's oldest sign company (I own it now) and back in the late 60's, he befriended a guy who did off-season business with several of the Chiefs players. When they won the SuperBowl in 1969, he came into our shop with a dozen of these Spalding balls and asked my dad to hand letter them as you can see here. In exchange for his service, his friend brought him back this ball with 39 signatures of the 44 final roster players. These include: Len Dawson, Tom Flores, Mike Livingston, Mike Garrett, Wendell Hayes, Robert Holmes, Ed Podolak, Frank Pitts, Gloster Richardson, Otis Taylor, Fred Arbanas, Curtis McClinton, Ed Budde, George Daney, Dave Hill, E.J. Holub, Mo Moorman, Remi Prudhomme, Jim Tyrer, Aaron Brown, Buck Buchanan, Curley Culp, Ed Lothamer, Jerry Mays, Gene Trosch, Bobby Bell, Chuck Hurston, Willie Lanier, Jim Lynch, Bob Stein, Caesar Belser, Jim Kearney, Jim Marsalis, Johnny Robinson, Goldie Sellers, Emmitt Thomas, Jerrel Wilson, Jan Stenerude, and Willie Mitchell. Not signed are Jacky Lee, Paul Lowe, Noland Smith, Mickey McCarty, and Warren McVea.
I recently spoke with the widow of my recently deceased father's friend to see if there were any details I wasn't aware of. She said I have it right - AND - she still has her late husband's football. As to where the other ten are is anybody's guess.
I'm more of a car guy instead of a sports guy but my gut tells me this is a good piece to have.