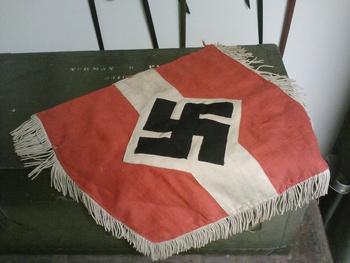 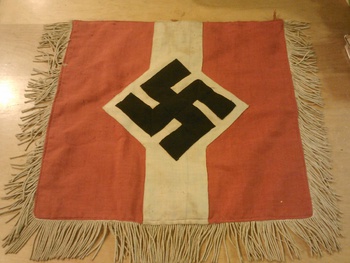 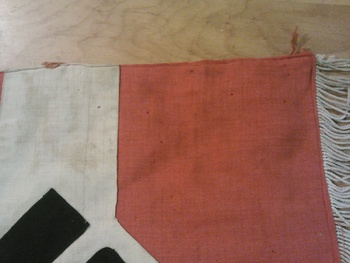 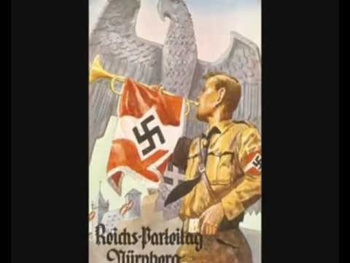 At the end of the war, my father was in the area of Nuremburg. He found this nailed to a wall, and pulled it down as a souvenir. I’ve identified it through a couple of reference books as a Hitler Youth trumpet banner. Given that Nuremburg was where the big Nazi rallies took place, I wonder if this might have been used in them. Given that at the end of the war, the Hitler Youth were used as a last line of defense, I’ve often wondered how it came to be nailed to a wall, and what happened to the presumably young person who nailed it there.

Although the illustration I’ve found online shows the white band running the other direction, both horizontal and vertical versions exist. Shreds of the original tabs that would have secured this example to a trumpet are present. The banner is made of different colors of material (wool, I think) sewn together, white on top of red. The swastika itself was made from two strips of black cloth folded and sewn in the shape of a swastika on top of the white material. Beige batting beneath the red layer is visible through some of the moth holes. Both sides are identical. Not including the fringe, the flag is 19” wide by 18” long. The fringe adds about 2 ½” to three sides.

The first photo includes my dad’s footlocker, which I will post sometime in the future. 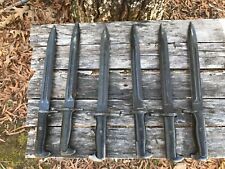 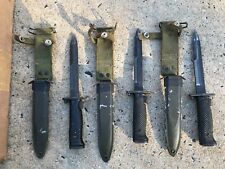 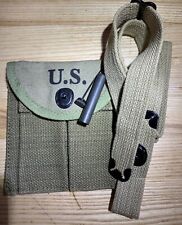