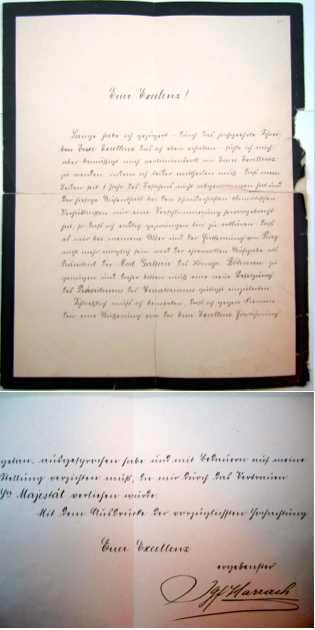 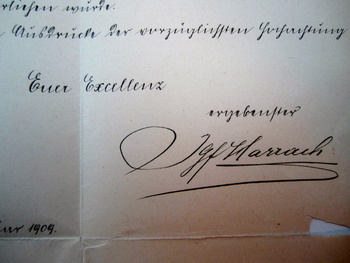 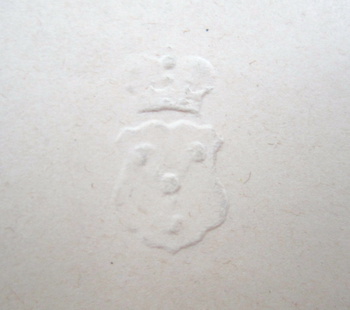 As a collector of Harrach glass, it just doesn't get better than finds like this (found on eBay). Jan Nepomuk Graf von Harrach (11/2/1828-12/12/1909) was the great-great-great grandson of Aloys Thomas Raimund Graf von Harrach, who established the original glassworks in 1712. In addition to owning the glassworks, Jan Harrach was a politician who began his career in the Imperial Parliament in 1870. Like his father, Franz Anton von Harrach , he was a member of the conservative, patriotic Czech aristocracy. Since the mid-19th Century, he took active part in political and cultural life in Bohemia. He was chairman of the association to build the National Theatre in Prague and continued to support the Czech opera. He sponsored an opera competition in the 1860s that drew the attention of contestants such as Bedrich Smetena. He was also on the Board of Trustees of the Matice Ceská, a corporation that dealt with the scientific and enlightening activities in the field of art and literary history. He was the president of the Modern Gallery of the Kingdom of Bohemia, a foundation set up in 1902 by the Emperor Franz Joseph himself. He wrote books and worked for several years as CEO of Slavie bank. His nephew, Franz Maria Alfred was the bodyguard for Archduke Franz Ferdinand and was standing on the running board of the car when the Archduke and his wife were assassinated by Bosnian Serb Gavrilo Princip, the event that triggered the first World War.

In February of 1909, the aging gentleman, in poor health and with some trepidation, sat down to write a letter to the office of his Majesty to announce his decision to resign his post as president of the Modern Gallery. This was the letter I acquired from a German seller on eBay. I have spent the last week translating the German script with moderate success. Fortunately, Count Harrach had impeccable handwriting. I had to take some liberties with the grammar, as I don't speak the language myself - this is the translation I came up with:

I have long delayed a response to the esteemed letter by Your Excellency, as with moderate confidence I turn to Your Excellency and unfortunately must impart: that my suffering for 1 year has not subsided, and the dreadful climate conditions locally have only made things worse, so I'm finally forced to declare: that my age and the distance to Prague make it no longer possible to satisfactorily fulfill the honorable task as president of the Modern Gallery of the Kingdom of Bohemia, and therefore must ask that you kindly initiate a new occupation of the Executive Board. Finally, I must say that I have spoken out against anyone mentioned in the statement by your Excellency, and with regret must renounce the position granted to me in trust by his Majesty. With the expression of the highest consideration,

Your Excellency,
most devoted

Photos: (L to R) Jan Harrach, Emperor Franz Joseph on a postcard designed by Kolo Moser (I have one of these also), a full scan of both pages of the letter, a closeup of the signature, and lastly the Harrach family crest, embossed on the stationery that the letter was written on.