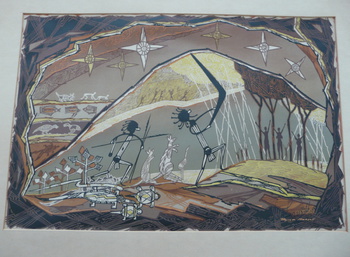 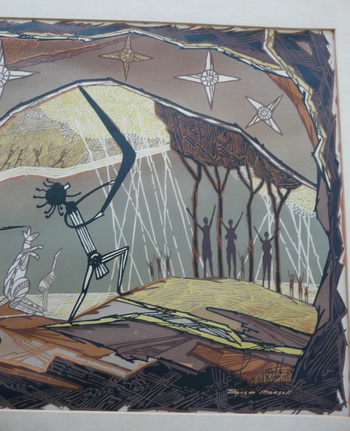 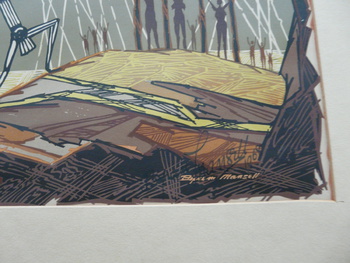 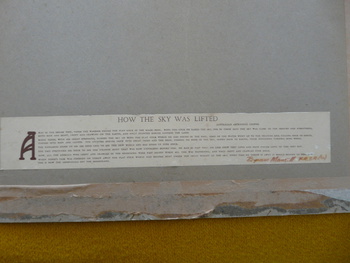 This print came home from the Rozelle markets a year ago on a Saturday morning. It is a framed version of a lithograph produced originally c. 1946.
The simple colours and the line technology were influenced by “The Culture of the Stone Age people”- the Australian aborigine. It was originally produced as a folio sheet with the print and text below it. The text tells the Aboriginal legend about how the Boomerang came to the Aboriginal People. I've reproduced a copy of the legend below.

In this case the text was preserved and stuck on the back of the cardboard mount. It was signed by Mansell within the print and yet again in in above that signature in ink (and dated 1968) and yet again under the text in ink as well.
Behind the print Mansell has also signed yet again and added:
"Mural/ Original Painted with Australian Earth colours
Byram Mansell F.R.S.A. (Lon.) A.R.A.S./ Studio/ 37 Marian St/ Killara"

Four signatures for the price of one!

In the latter case as seen in photo 4 Mansell added F.R.S.A. or Fellow of the Royal Society of Arts. Interestingly too he added (Lo) for London.

Byram Mansell was born William Arthur Byram Mansell on 9 September 1893 at Double Bay here in Sydney, Australia. He was a painter, illustrator and theatre designer whose work diverse artistic practices, which ranged from painting to set design, were very much influenced by his interest in Aboriginal art.

There are connections with the US in the work of Byram Mansell:

“In 1921 Mansell attended the Honolulu Academy of Arts, Hawaii, and in that city opened his first art studio. His flower paintings, mounted on black lacquered Japanese screens, proved popular. After briefly studying art, design, textiles and technology in Mexico, he spent two years at the Académie Julian, Paris. He operated a studio in Hollywood Boulevard, Los Angeles, United States of America, worked for Cecil B. de Mille, designed costumes for several film studios and masks for Lon Chaney, and executed over forty commissions to decorate cafés, theatres and cabarets in cities such as New York, Chicago and Los Angeles. One of his commissions contracted him to decorate coaches for the Atchison, Topeka & Santa Fe Railway Co. His interiors showed an influence of Art Nouveau, especially the style of L. C. Tiffany.”

LEGEND.
"Away in the Dream Time, Yondi the warrior found the flat stick in the magic pool. With this stick he raised the sky, for in those days, the sky was close to the ground, and everything, both man and beast, crawled on the earth and only shrubs covered the land. When Yondi, with his great strength, pushed the sky up with the flat stick, which he had found in the pool, some of the water was taken up to the heavens and falling back to Earth turned into rain and clouds. The stunted shrubs grew into great trees and the birds, finding no food in the sky, glided back to earth, their shoulders turning into wings. The kangaroo stood up on his hind legs to see the strange new world and has stood up ever since. Thz emu, our largest bird, stretched his neck to see the strange sight that was unfolding before him. He ran so fast his legs grew very long and have stayed long to this very day. Now, all the animals who crept and crawled in the beginning were fast asleep when all this was happening and have crept and crawled ever since. When Yondi’s task was finished he threw away the flat stick which had become bent under the great weight of the sky; every time he threw the stick away, it would return to him. And this is how the Aboriginals got the Boomerang."