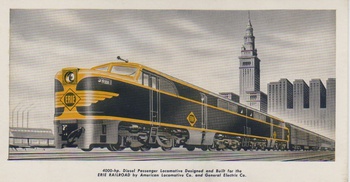 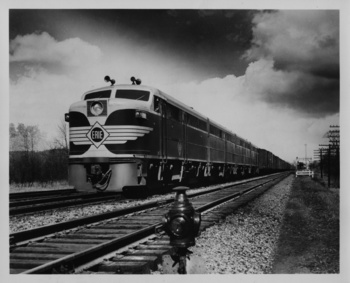 The front of the Erie PA1 advertising card effectively connotes the beauty and power of this machine. And its reverse renders its technical data. This was issued by the PA1's manufacturers.

In the center is shown a similar engine by ALCO, but as a FA1, it was designed to haul freight, rather than passengers, as the PA1 was. This is an official portrait issued by the Erie, and it's clear that the photographer took this assignment seriously. What a well composed work!

On the right is an ALCO Builders' Card for this PRR FA1. Each of the locomotive manufacturers issued such cards, with the product's photo on the front, and its specifications on the reverse. Such builders' cards featured both steam and Diesel engines.