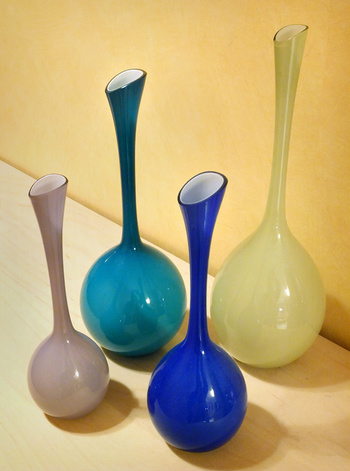 Erik Hovhammar (1922-2006) took over the lead at Lindshammars glassworks in 1949, after his father's death. He realized that the glassworks range must be renewed and therefore he hired the same year Gunnar Ander (1908-1976) as a designer and product developer. Ander then worked at Lindshammar throughout his life until 1976.

He composed an entirely new range of everyday and art glass with very different shapes and looks. Among the things he brought was such as new glass in the diverse and vibrant colors with white interior casing. These four orchid glasses from the 1950s was made in a time typical form, with an iconic asymmetrical shape (shapes one could find in several other glass manufacturers range from the same time period). Here in colors of cobalt blue, light lavender, turquoise and lime yellow. Gunnar Ander developed (together with a very skilled glass technicians) 56 new glass colors for Lindshammars glassworks, and after that it came to be called "the glassworks with color."

Ander worked alongside Lindshammars glassworks, as a designer for the company Ystad metal where he sometimes combined metal forging and glass objects. Other glass artists also combined forging with glass, such as Erik Hoglund for Boda glassworks.