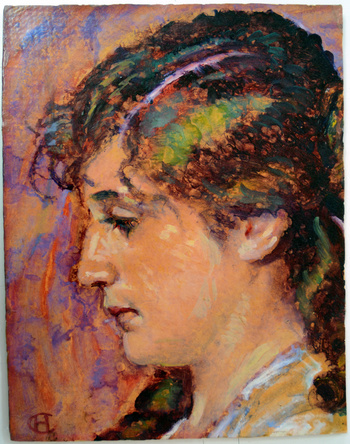 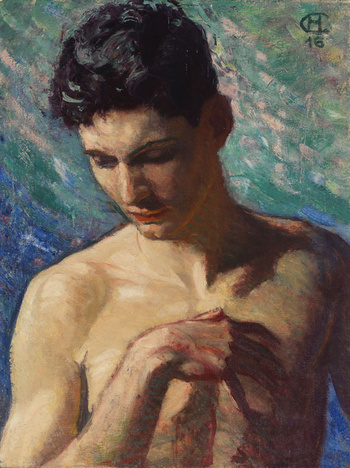 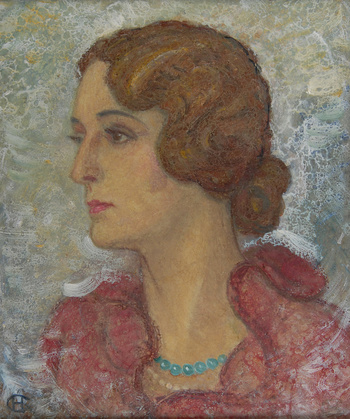 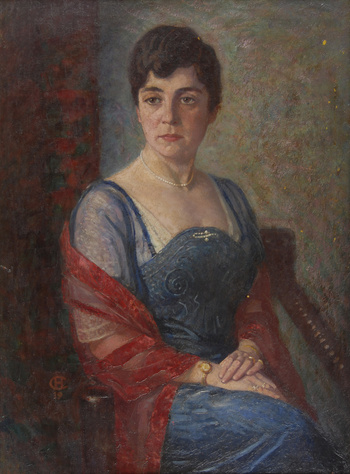 Expressionist style portrait of either Christiansen’s wife (Claire) or daughter (Hertha), with greater weight on the former being the subject of this profile given comparisons with known pictures of his wife (2nd photo) and daughter (3rd photo). The painting is rendered in gouache on paper and then secondarily laid down on artist board. The technique used in this painting is prototypical of most of Christiansen’s later works where he would allow the background to run, swirl and become abstract in pattern. Christiansen’s “CH” artist mark is painted in the lower left corner. Other works by the artist from the same period are provided for comparison.

Hans Christiansen is considered one of the main proponents of German Jugendstil. Christiansen's graphic works from the late 1890s had a significant influence on the art of the time and propelled the Jugendstil into its own on the world stage. After an apprenticeship as a decorative painter in Flensburg, Germany from 1881 to 1885, Christiansen spent two years working at an interior decoration shop in Hamburg. He subsequently moved to Munich in 1889 and additionally traveled to Italy to study art. Christiansen gained a job soon thereafter as an art teacher at a technical college in Hamburg. At the same time he worked as a freelance decorative painter and contributed to the "Volkskunst-Verein," which was trying to bring about cultural and artistic reform modeled on the Arts-and-Crafts movement.

Christiansen visited Chicago in 1893, during which he saw glass and other decorative works by Louis Comfort Tiffany, which left a lasting impression. In 1895 he moved to Paris, where he studied painting at the "Academie Julian" from 1896 to 1899. It was during this time in Paris that Christiansen met his wife Claire Guggenheim and they wed in the Spring of 1897. Christiansen's early and mid-period style of painting and drawing was influenced by Nabis and representatives of the French Art Nouveau. He contributed to the Munich journal "Jugend," for which his cover art and graphic advertising designs in the periodical made him famous.

In 1898 the artist was awarded a professorship, and he continued his work in the Darmstadt artists' colony, where he stayed until 1902. During the winter months Christiansen often stayed in Paris, where he mainly focused on artisan crafts, concentrating primarily on textile art. Starting in 1914-18, Christiansen turned to painting in an expressionist style, quite different from his Japonism and Nabis roots, and he focused almost exclusively on portraits. He continued to produce portrait type works in this expressionist style until 1933, after which Christiansen was banned from painting by the growing German fascism movement who deemed his work, "entartete kunst" (degenerate art). He turned exclusively to textile design until his death in 1945.