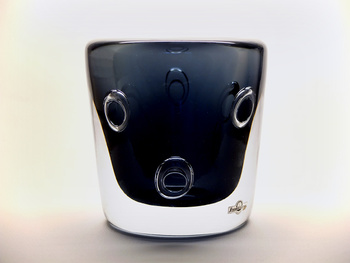 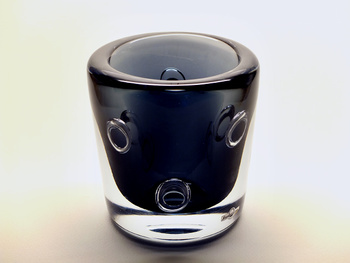 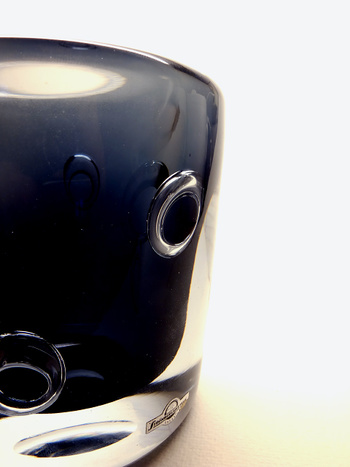 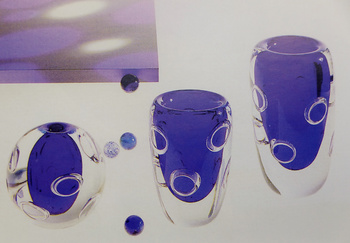 The vase is a pure craftmanship, completed in the foundry with manually operated/driven edge. The bottom is after worked with flat grinding of the pontil mark. No machines have been involved in the production. Strömbergshyttan was careful to use only manual craftsmanship. The Stromberg factory considered it was too simple with mechanical manufacturing. If you hold a Stromberg piece in your hands, you can be absolutely sure that it is pure craftsmanship.

B 943 was also produced in clear Stromberg crystal. And there are similar models in other sizes and heights. B 942 is a higher an not so wide vase in the same style with the air rings, 275 mm high. I know there is a bigger vase/bowl (about 150mm high and 180-200 mm wide) but don't know the model number, and some other smaller bowls, also with the typical air rings. The rings was applied with an iron pipe, which was pressed into the hot empryo (called post in Swedish), before a final clear glass layer was caught over. The color underlay was applied first, with a layer of clear glass over, before blown up.

Sometimes Gunnar Nylund get credit for these models, but it's most likely a design by Asta Stromberg. She has also designed a narrow sputnik-vase about 1968-70 with tapered top that has these air rings, model number B 1150 in 300, 375 and 475 mm heights. I would be happy if I found some of these.

EDIT 2013 06 05: The last Picture shows vases by Rune Strand for SEA glassworks, produced in Studioglass Strombergshyttan 1988. Rune was inspired by the early Strombergshyttan, where he worked as designer and engraver 1963-1968, as you can see. The same style with air rings and colored underlay in the SEA vases from 1988, as in the Stromberg vases from 1961-62. Strombergshyttan also had a spherical vase, exactly like the one to the left with air rings, number B 1015 (and a one without rings B 937). The number B 1015 indicates a design from about 1963-64 as I see. B 937 from 1961-62. Maybee B1015 is a design by Rune Strand under his first years in Strombergshyttan? And maybee he made the same design for SEA in 1988? Otherwise Rune designed almost only engraving motifs for Strombergshyttan. But there are a few vases to, that we can attribute to him for shape. Can the spherical vase with air rings be one of these? But the shape is essentially a design by Gunnar Nylund and B 937 is mostly attributed to him. The air rings have been added later. By Rune Strand or by Asta Stromberg, that's the question?

Another vase with air rings from Strombergshyttan, B 1174, is almost in shape like Rune Strands SEA-vases from 1988 in the middle and to the right in the last picture. B 1174 indicates a design from 1972, so Rune Strand can not have designed Strombergshyttans B1174, he ended there in 1968. Possibly he could have designed the vase Before 1968, and the drawing since been lying around for some years before Strömbergshyttan took the model into production in 1972? However, not so likely as I see it.

This is an interesting question for the historical documentation. Gunnar Nylund considered Strombergshyttan made some changes to his basic models and produced/sold this glass between the years 1957-66, without he got his contractual provision. An agreement was reached where Nylund got a fixed amount of money, and also a large part of the stock experiments glass Strombergshyttan had. In addition, he received under 4 years, take out glass from second class sales at the factory for a specified amount. All to compensate for his lost provision. Strömbergshyttan admitted that they made a mistake and compensated Nylund for this. I found fore some days ago the contract, signed Nov 13. 1967 by Gunnar Nylund, Asta Stromberg and two whitnesses, and some other documents that shows this facts are true. Nylund then continued designing glass for Strömbergshyttan on a freelance basis until the mid-1970s. So he was happy enough with the deal as it seems.

It can therefore be concluded that some models and drawings of glass, designed by Gunnar Nylund, was changed slightly to shape and appearance during the years 1957-1966 at Strömbergshyttan. If this was done deliberately, or by tradition (Asta Stromberg had previously changed some basic models designed by Gerda Stromberg and given them new model numbers) I do not know? But I think they simply saw it as a natural renewal of the design at the mill and it was not forbidden to be inspired by what has been established previously. Glass production was a team work said Edward Stromberg once upon a time, and the designers/artists was never hold before anyone else. When new artists outside the Stromberg family came to Strombergshyttan (both Gerda Stromberg and Asta Stromberg belonged to the family who owned the factory) worked this way to renew the production not so good.

However, there was collaborations and the designers inspired each other, resulting in beautiful glass. And that's the main thing. In the case of manually made art glass, the result depends also on the person doing the work, more than in any other art genre. But no one ask who did the pieces, only who drewed them on a paper. And as we see here, it is easy to take another artists idea or model, add or remove any detail, and then present them as their own or new models. But as difficult and demanding of skill to turn them into real objects, regardless of who designed them. I think Edward Stromberg was right, manual glass production is a team work.

EDIT 2013 12 19: I have now found a photo from my father, taken in our home. It shows this vase model B943 in clear crystal and a bowl, a bigger vase/bowl and two egg shaped sculptures. All with this air rings. On the backside of the photo my father has written: "Vases, bowls and eggs by Asta Strömberg". Another strong evidence that this is a design of Asta Stromberg. NOT Gunnar Nylund or Rune Strand.