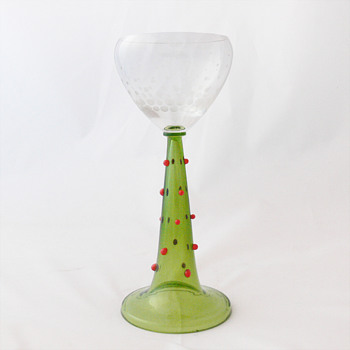 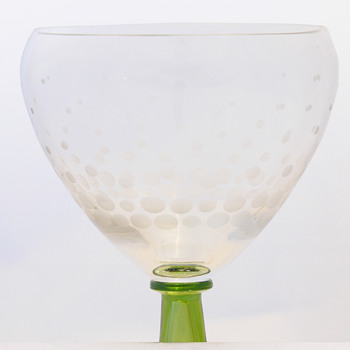 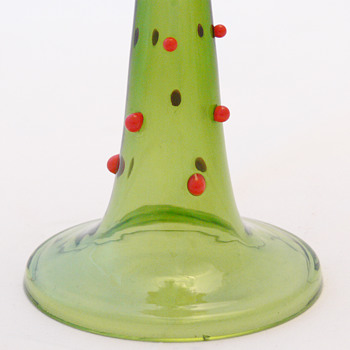 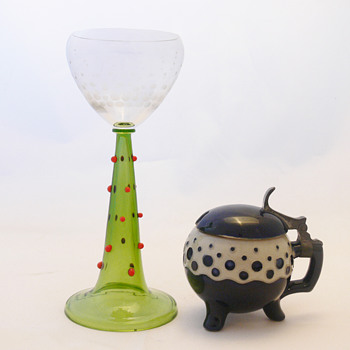 The shape was designed by Richard Riemerschmid in 1902 (in an all clear glass version), and the decoration was made by Gustav Carl von Reichenbach. It was made at the Poschinger factory in Oberzwieselau in 1905.

The base is trumpet shaped, much in the German tradition of old Römer glasses, and the cup is tulip shaped. the green base is adorned with lovely small orange glass balls whereas the decoration of the cup consists of engraved matt circles of different sizes. Although the decoration is a work of Reichenbach is funny to observe that it follows a pattern widely used by Riemerschmid himself, as you can appreciate on picture 4, where you can see a stoneware mustard pot designed by Riemerschmid in 1902 (I think this one will will capt Vetraio's interest).

It was easy to find info about this glass. The shape we already known as it's a well known design by Riemerschmid and it appears in several books. We also saw this shape and other two glasses belonging to the same range at the Peter Behrens exhibitions we went to see in Ghent, Belgium (the collector whose collection was being shown - I guess that's every collector's dream: having your very own collection displayed at a design museum!- collected pieces of not only Behrens but its contemporaries... Van de velde, Riemerschmid, Sitka, Hoffmann, Albin Müller...), and Carlos already knew the designed as it had appeared at a prime European auction's house catalogue.

By the way, the glass was announced as "attributed to Peter Behrens" because the trumpet shaped base reminds a little of that Behrens used for the red glasses he designed for the Behrens Haus in Darmstadt's Matidenhöhe artists's colony. It seems that the seller found out what it actually was once Carlos had purchased it and he sent him the right information. Wasn't he a great honest seller?

Well, I guess everybody must know who Richard Riemerschmid is (I shared here the pics of a candleholder he designed in 1897 (http://www.collectorsweekly.com/stories/97612-bronze-candleholder-richard-riemerschmi?in=user), but Georg Karl von Riechenbach (sometimes he appears as such, other times as Carl-Georg ) isn't that well known, although his work is truly amazing.

G-K (or C-G) von Reichenbach was born in Munich in 1872. He signed his work as Irgl Reichenbach, and he's mostly known as an interior designer. Studied at the Kunstgewerbeschule in Munich and later he studied with Obrist and Debschitz, and at the same time he learnt the craft of glassmaking at the Benedikt von Poschinger's works. Later he set up his own workshop in Berchstesgarten and later in Tegernsee, where he produced furnishing items: furniture, clocks, textiles, glass... In fact it was his designs in glass (both artistic and utilitarian) that made his name as a designer.

By the way, cogito shared a wonderful goblet here at CW: http://www.collectorsweekly.com/stories/30637-carl-georg-von-reichenbach-secessionist