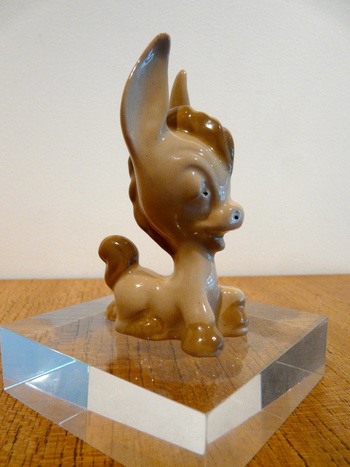 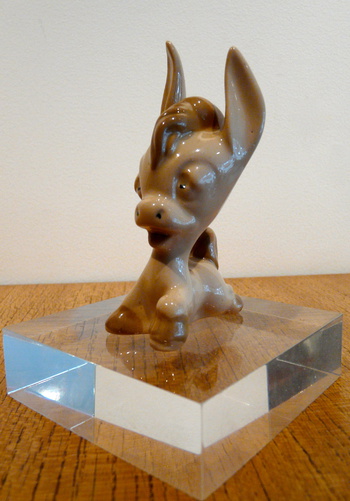 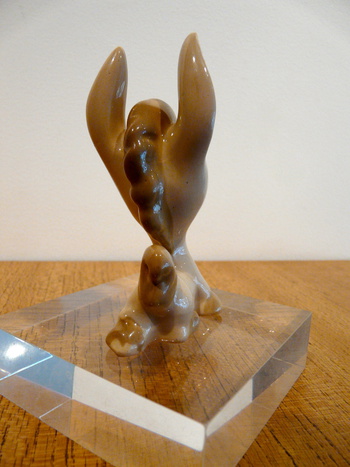 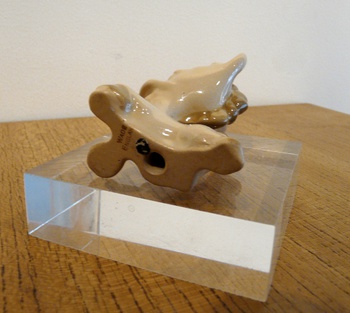 The shed is full!
What can I do?
A hoarder's last ditch stand!
Buy small!

With these thoughts in mind I have been out looking for the smaller object. This little "Whimsy" caught my eye at the Salvo's. Not cheap but it has some appeal. The original price was two shillings and six pence (2/6)!

The original company George Wade & Son Limited was founded in 1810. They produced industrial ceramics - insulators and "to meet the growing demand for Industrial Ceramics a new company, Wade (Ireland) Limited, was formed in Northern Ireland in 1947 and the combination of fresh ideas with solid experience has proved highly successful."
http://www.teleramics.com/makers/wade.html

Tough stuff, Wade!
Durable!
Wade was a Family Company. After World War II the company chairman Sir George Wade kept the plants alive by diversifying into cheap ceramic collectibles. In 1953 the first series of Wade Whimsies appeared on the market: "a miniature set of porcelain figures. The company produced sets for most of the 1950s for retail sales, stopping in 1959, but continued producing them as premiums (see Red Rose below). In 1971 Wade again produced the figures for general sales, continuing until 1984."
http://collectibles.about.com/od/potterycompanies/p/wadeindex.htm

I have been going through a "Donkey Period" with the Italian Ciucci.
This is an Irish version.
There are actually two donkey figures: one happy and one sad. This is the cheerful one. He is called Cheerful Charlie and his sad mate is called Doleful Dan. Doleful Dan's ears are a bit floppy. A bit Disney-esque?

The information on the net about Charlie suggests a variety of dates.
Can anyone clear the matter up?
(1948 - 1952 are the suggested dates)?