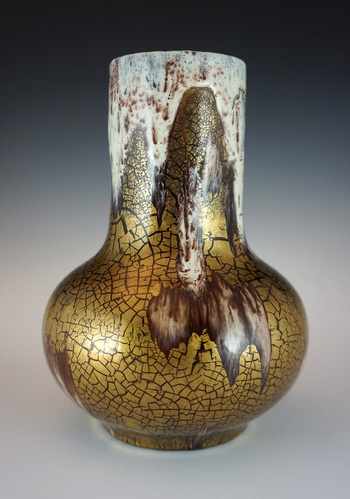 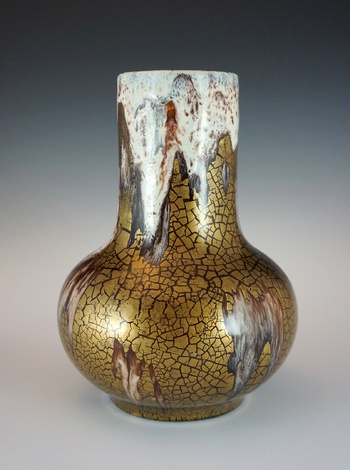 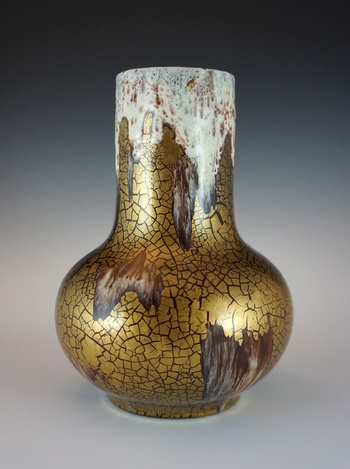 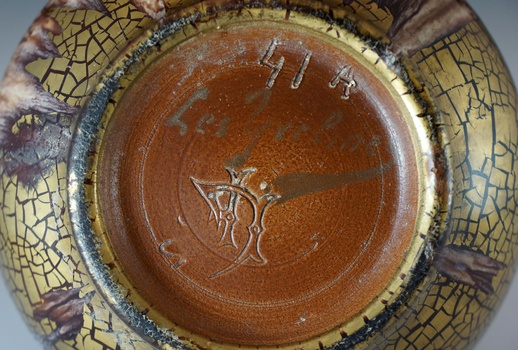 The glaze effects here are hard to describe. The majority of the surface is covered with a perfectly smooth gilt gold crackle glaze. Yet, there are pockets of abruption and flow scattered about and the top has a textured cream flow giving the impression of an eruption or snow covered peak.

There is a similar glaze application/effects vase that was in Jason Jacques' retrospective exhibition of the ceramicist Edmond Lachenal and his sons that was produced by Raoul Lachenal a good 20 years later than the Franchet example above.

The vase carries Franchet's distinctive impressed initial mark, but is also signed "Les Yvelines." This painted addition provides some heretofore unknown information about the scientist and artist. He was known to have produced ceramics in Golfe Juan in the early part of the 20th century, but then moved to Asnières (near Paris). And, by 1909 it was thought, however, that when he moved to Asnières his ceramic production practically ceased as Franchet became more involved in academic endeavors (some of which can be found on Google books; see "The Decoration of Artistic Grand Feu Gres" in Keramic Studio, 1911. http://books.google.com/books?id=ZRg6AQAAMAAJ&pg=PP6 ). This vase provides counter-evidence and suggests that Rocherfort-les-Yvelines was possibly selected as a regional outlet for a limited number of late ceramic wares with highly unusual, experimental glazes; of which I would posit that this example is certainly one.