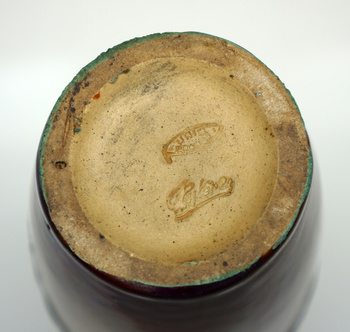 A tall purple reflective glaze Alphonse Cytère (1851-1941; Rambervillers, Fr.) vase with pewter floral overlay, circa 1900. The overlay on these pieces are notoriously fragile as the overlay was typically affixed with a wax-like adhesive that decays over time. Most overlay failed to survive. This vase has its overlay perfectly intact, though one can see where the surface sheen of the vase around the overlay areas has been affected over time by the wax adhesive. Dimensions: 10” (height) x 4.5” (width).

Alphonse Cytère was born in Tauves (Puy-de-Dome) in 1851 and died in Rambervillers (Vosges) in 1941, as a French chemist/ceramist related to the École de Nancy. In 1891, Cytère became the director of the Société Anonyme des Produits Céramiques de Rambervillers (S.A.P.C.R.), whose principal activity was the manufacture of industrial ceramics and glazed drain pipes. In 1903, he broke from industrial ceramics and established a ceramic arts studio producing edited pieces (vases, decorative objects, architectural elements) provided by many artists of the Ecole de Nancy including Jacques Gruber, Eugene Vallin, Ernest Bussière, Louis Majorelle, and Claudin Pierre René Jeandelle. These objects were available via catalog sales and presented regularly at fairs in the Lorraine Society of Friends of Arts and exhibitions of the Ecole de Nancy.