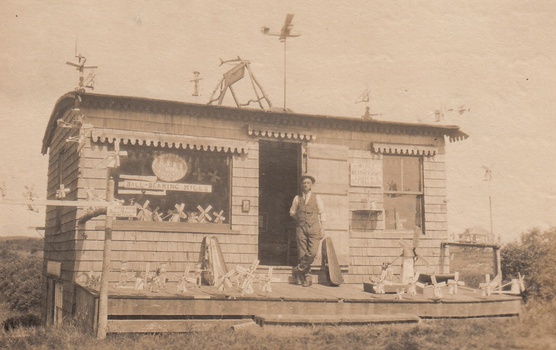 What at first seems to be to be a fairly routine real photo post card of a country shop provides seldom seen documentation for an American folk art form and regional craft, while at the same time reminding that a picture does indeed tell many tales.

"Nantucket' or "Sailor" whirligigs abound to this day, but the early ones for the most part have always been anonymous. The form is common (a bowlegged, bell-bottom wearing sailor twirling his paddle arms in the wind and looking ridiculous) The whirligig supposedly has origins in strict early day religious practices which forbid play on Sunday. A Sympathetic father would whittle a toy to entertain his bored children without tainting their hands with the devil's stain...hence, a twirling motion toy which moved by wind alone! That I have never believed this tale doesn't mean anything much, but it is an interesting tidbit. Anyway, the Massachusetts or Cape Cod whirligigs are popular as craft today, and the 19th century versions, with their weathered surfaces and original paint are among the most valued folk art objects and prized by collectors.

It appears to me this gentleman in his tiny Chatham "Shavings Shop" may be the source of dozens, if not HUNDREDS of original late 19th and early 20th century whirligigs. Chatham is part of Cape Cod, and he obviously had a rousing business in the objects...at least enough to have paid to produce a real-photo post card documenting his work. Close examination reveals many folk art prizes (on the roof, several "full-bodied" whirligigs of considerable size, a fish weathervane, a large airplane whirligig and several silhouetted carvings of sailors) The porch exhibits many additional, if more standard sailor whirligigs, numerous windmill toys and a violin...perhaps our carver made fiddles as well, but at the least I am certain a visit to his shop would have been a rousing time if he felt like entertaining. That his products were called "ball bearing mills" indicates his windmills would have been state of the art. Unfortunately, the oval window sign is indistinct, it appears to read Edwards novelties. Did Mr. Edwards invent the sailor whirligig form? The card was produced by the Charles H. Smalloff Mayflower Studio in Chatham, Mass on Artura Stock of a type used around 1910 and was mailed from Massachusetts using a 1 cent stamp issued in 1912. The postmark date is obliterated, but the stamp design was superseded in 1923.

I hope this photograph reaches someone who can provide additional information on this remarkable, pipe-smoking artisan, and until I hear more I'll simply treasure the find and be happy my scanner revealed some fascinating information which contributes a bit to the history of an art form I've loved for years. I suspect Mr. Edwards was more in the habit of pushing his crafts rather than his postcards. If any others survive I would be surprised, but would love to know.