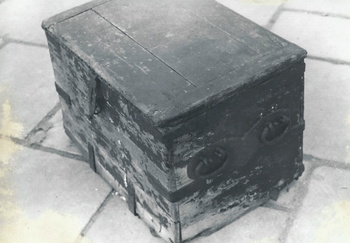 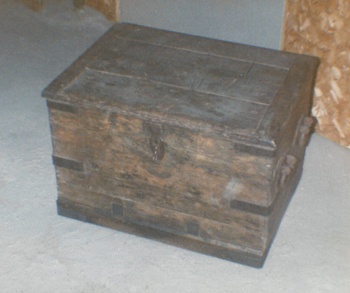 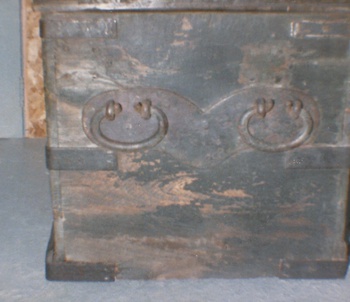 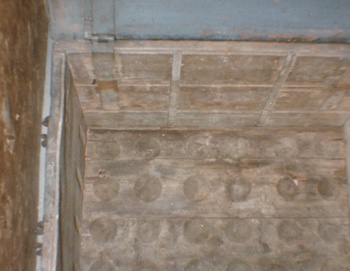 Hi
Everyone
I post this trunk for Trunkman, he want to see it, and tell me ,how bad i did to resale this museum piece.34"wide by 26" high by 26"deep, this Trunk have 12 forged square rienforced corner , double handle, the metal work on this Trunk was something special,the front show the inside show 24 connonball spaces on 3 level, this trunk can hold 72 cannonball,the side are made in OAK one piece.
When this Trunk was in use and full of Cannonball(72)this will need 4 strong man to move around for sure.The first picture is when i have unload at the shop, i restore this trunk by starting removing the last black color put on, an rearch the original black color, i restore also part of the lid and one molding missing the front as you see on the picture #2
I got this Trunk from Baie Saint-Paul(North side St-Lawrence river) when i am still very active has a Antique Picker(18 years ago)i locate a farm house pretty old looking, knock the door and senior gentleman come to the door, i ask him if he want to get rid of some antique he don't use , sure i should have something, very proud gentleman, start to talk about is family, he was happy to mention that he came from renonmed family his last name was Watteville, an is great great father have make the war with the American 1812, Major-General Louis de Watteville, well i say that's great, do you have anything you want to get rid of it, he show quite few thing, i have few piece of antique furniture, a huge Boat carve in wood, an inside one of is barn i see this trunk an i ask what about this Trunk, well talking about War this is a Cannonball Trunk, he open and show the inside(all carving in circular shape)concave carving, and he say, this being there for awhile, it's quite damaged, well i included in the deal, so keep add stuff to the list, finish with my visit, landing fill my pickup truck and half the trailer.
I was young and stupid, i get rid of so many nice antique in this period, i have hard time to sleep when i think about it.

The Battle of the Chateauguay was an engagement of the War of 1812. On 26 October 1813, a British force consisting of 1,630 regulars, volunteers and militia from Lower Canada and Mohawk warriors, commanded by Charles de Salaberry, repelled an American force of about 2,600 attempting to invade Lower Canada and ultimately attack Montreal.

The Battle of the Chateauguay was one of the two battles (the other being the Battle of Crysler's Farm) which caused the Americans to abandon the Saint Lawrence Campaign, their major strategic effort in the autumn of 1813.

The American plan[edit]
Late in 1813, United States Secretary of War John Armstrong devised a plan to capture Montreal, which might have led to the conquest of all Upper Canada. Two divisions were involved. One would descend the St. Lawrence River from Sackett's Harbor on Lake Ontario, while the other would advance north from Plattsburgh on Lake Champlain. The two divisions would unite in front of the city for the final assault.

The Americans around Lake Champlain were led by Major General Wade Hampton, who had taken command on 4 July 1813. Hampton had several misgivings about the plan. His own troops, encamped at Burlington, Vermont, were raw and badly trained, and his junior officers themselves lacked training and experience.There were insufficient supplies at his forward base at Plattsburgh as the British had controlled the lake since 3 June. On that day, two American sloops pursued British gunboats into the Richelieu River and were forced to surrender after the wind dropped and they were trapped by gunboats and artillery firing from the river banks.The British had taken over the sloops and used them in a raid against many settlements around Lake Champlain. In particular, they captured or destroyed quantities of supplies in and around Plattsburgh. Although the British crews and troops involved in the raid were subsequently returned to other duties, the American naval commander on the lake, Lieutenant Thomas Macdonough, was unable to construct a flotilla of sloops and gunboats to counter the British vessels until August.

Finally, Hampton, a wealthy southern plantation owner, despised Major General James Wilkinson who commanded the division from Sackett's Harbor and who had a reputation for corruption and treacherous dealings with Spain. The two men, who were the two senior generals in the United States Army after the effective retirement of Major General Henry Dearborn on 6 July 1813, had been feuding with each other since 1808. Hampton at first refused to accept orders from Wilkinson, until Armstrong (who had himself moved to Sackett's Harbor) arranged that all correspondence regarding the expedition was to pass through the War Department.

Canadian counter-moves
The Swiss-born Major-General Louis de Watteville was appointed commander of the Montreal District on 17 September. In response to reports of the American advance, he ordered several units of militia to be called up. Reinforcements (two battalions of the Royal Marines) were also moving up the St. Lawrence from Quebec. The Governor-General of Canada, Lieutenant General Sir George Prevost, ordered Lieutenant Colonel George MacDonnell to move from Kingston on Lake Ontario to the front south of Montreal with his 1st Light Battalion of mixed regular and militia companies.[16] Already though, the commander of the outposts, Lieutenant Colonel Charles de Salaberry, had been organising his defences. In addition to his own corps, the Canadian Voltigeurs, and George MacDonnell's 1st Light Battalion, he had called in several units of the Select Embodied Militia and local militia units.

De Salaberry had many informants among the farmers in the area who provided accurate information about the strength of Hampton's force and its movements, while Hampton had very poor intelligence about De Salaberry's force. The road along which Hampton was advancing followed the north bank of the Chateauguay. Facing a ravine where a creek (the English River) joined the Chateauguay, de Salaberry ordered abatis (obstacles made of felled trees) to be constructed, blocking the road. Behind these he posted the light company of the Canadian Fencibles under Captain Ferguson (50); two companies of the Voltigeurs under Captain Michel-Louis Juchereau Duchesnay and his brother Captain Jean-Baptiste Juchereau Duchesnay, totalling about 100 men; an elite militia company from Beauharnois under Captain Longuetin (about 100) and perhaps two dozen Mohawks nominally commanded by Captain Lamothe. To guard a ford across the Chateauguay 1 mile (1.6 km) behind the abatis, he posted the light companies of the 2nd and 3rd Battalions of Select Embodied Militia under Captains de Tonnancoeur and Daly, and another company of Beauharnois militia under Captain Brugière (about 160 in total). In successive reserve positions, stretching a mile and a half along the river from the abatis to the ford and beyond, were another five companies of the Voltigeurs (about 300); the main body of the 2nd Select Embodied Militia (480), 200 more local "sedentary" militia; and another 150 Mohawks.De Salaberry commanded the front line in person, while the reserves were commanded by Lieutenant Colonel MacDonnell.

All of de Salaberry's forces were raised in Lower Canada. The Canadian Fencibles were raised as regulars, though liable for service in North America only. The Voltigeurs were volunteers and were treated as regulars for most purposes. The Select Embodied Militia contained some volunteers but consisted mainly of men drafted by ballot for a year's full-time service.

De Salaberry had been so confident of victory that he had not informed his superiors of his actions. De Watteville and Sir George Prevost rode forward and "approved" de Salaberry's dispositions, even as the fighting started.