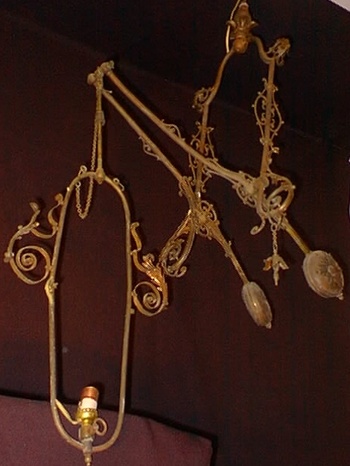 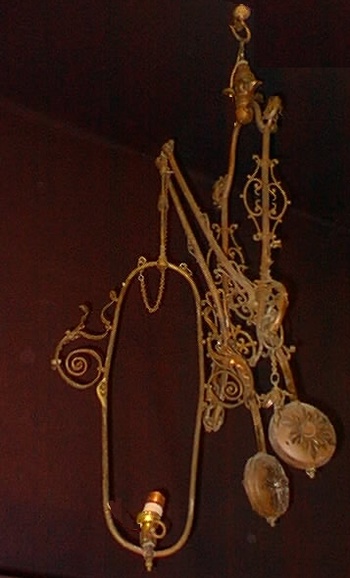 This is a real show and tell. Apologies only given for the dreadful photos. It was a case of too excited to share it to care about the poor light, and lack of care in trying to produce great shots. ;o)
I would love to share with you an example of the Best surprise pendant gas fixture. It was invented in 1893 by Robert Hall Best. A fitting which offered all-round versatility. Could be described as the prototype for the angle poise electric lamp. One of these was purchased by Albert Edward, the Prince of Wales for the King's Library at Sandringham from the Best and Lloyd Company. It would be wonderful to know if Sandringham still contains that fixture or if indeed their are other examples in England in use, if only as examples of the wondrous accomplishments of people of those times.
This particular example was purchased by me from a basement in Western Ontario. It had been as is fitted for electricity by a butcher, if I may say that. I can though, repair the damage done and although I do intend to fit it again for electricity so that it can be used, I will do the operation kindly. The story which came with the fixture was that it was used as an examination light in the practise of a GP in North Western New York State. This example is shown with much ornamentation and the only other examples I have seen of this light had virtually none. The weights have ornaments added to the sides which elevate the fixture, in my opinion to one that would not only be of amazing usefulness but also a beautiful fixture to grace the home or office of the owner. I have been killing myself to find ''the shade'' to use on this piece and my plan has been to use it over the island in my kitchen. A little OTT to be sure but why not? ;o) Oh for those that require a translation, OTT is over the top.
Can't you just imagine the Opaline Brocade shade I recently posted gracing this beastie?
I hope you have enjoyed seeing this fixture. They are in my humble experience very close to a rarity. If anyone has seen other examples and wishes to share the places or even better images that would be a great delight for me and I am sure for others who are thrilled by gas lighting of it's golden days.