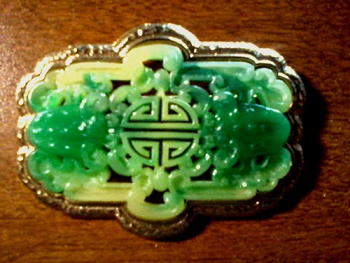 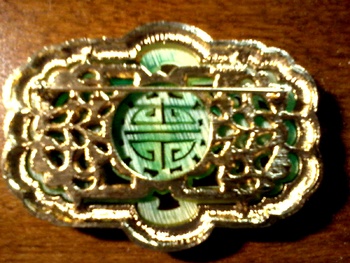 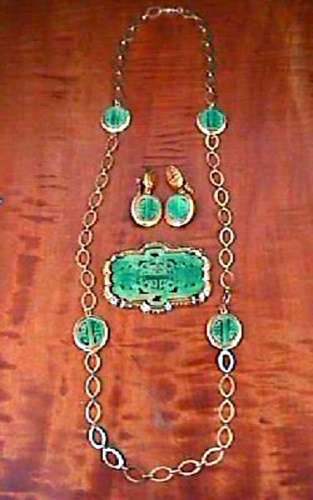 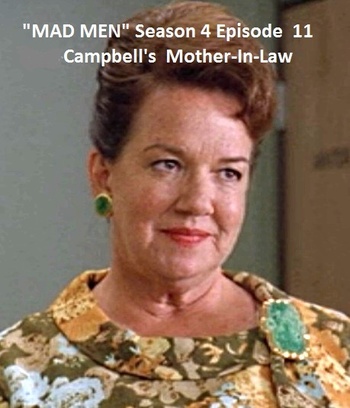 Found this huge faux jade brooch at Salvation this morning. I really didn't know that Vendome is actually Coro's high end line of jewelry. It's marked in the upper right hand corner by the pin. Lot's of images online of this piece along with the necklace and earrings. I wasn't that lucky though just scored the brooch. Maybe the other pieces will turn up eventually. I don't watch "Mad Men" but Peter Campbell's mother-in-law wears this Vendome faux jade brooch and earring set, in Season 4, Episode 11. Interesting to see something you own being worn an a popular TV series and that wardrobe is using vintage pieces from that decade. -Mike-

"Coro"
The Jewelry Lines and Marks
Courtesy of www.jewelcollect.org

Coro's mainstay products consisted of cast jewelry although stampings were also used. Coro marketed many so called lines of jewelry. Unique names were invented for the different lines depending on which type store would be selling them. Some stores would sell, or carry one or several lines but not certain others, and vice versa.
The name and/or mark of each line was only important at that time for this reason:
A store that sold, say, Coro-marked jewelry, was not allowed to carry Vendome mark jewelry. Vendome was Coro's better line, more costly. A better store would carry Vendome but would not want Coro [mark] because by the early 1950s it had come to represent a cheaper line.
The later Coro lines, from 1950s and on, with the Coro mark on them, were only sold in general department stores. Better specialty stores such Neiman Marcus, Saks Fifth Avenue, Lord & Taylor, Dillard's, Bloomingdale's, Gum's, and other fine stores, would carry Vendome, Corocraft, Coro Sterling Craft but not plain Coro. These lines were pricier to appeal to the specialty store customer.
But not necessarily all lines were produced at the Coro plant, some were made by other manufacturing contractors, such as the Hedison Co. in Providence. Some lines were even imported, including lower-priced items with a Coro hangtag which also had the country of origin printed on the reverse.