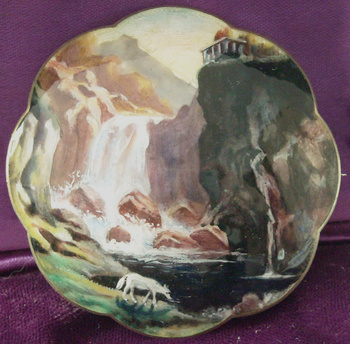 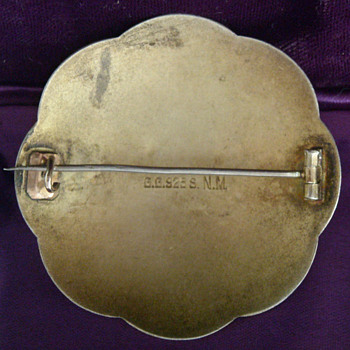 Gustav Gaudernack (1865-1914) is one of the greats, considered as Norway's leading Art Nouveau goldsmith.

He was born in Bohemia and studied glassmaking and enamelling in Vienna, before moving to Kristiania (now Oslo) in 1891. From 1892 to 1910 he was the leading designer at David-Andersen where his work included plique á jour of extraordinary quality.

In 1910 he opened his own workshop producing Art Nouveau enamel jewellery. He died tragically just 4 years later after a failed appendectomy, however the business did continue for a while under the direction of his widow and sons.

His lobed enamel brooches turn up from time to time, distinctive by their gorgeous detail, usually depicting birds and scenes from nature.

The detail is incredible on this 2.5in diameter silver brooch. Under magnification you see the wolf's shadow, the spray and foam crashing around the rocks, and the guilloche that enhances the sunrise.

This brooch is somewhat different to Gaudernack's usual objects of beauty. It sought me out some years ago, because, after reading Hamlet's Mill, I'd become interested in Nordic Mythology, and knew just enough to recognise the scene.

Gaudernack was certainly familiar with the Nordic myths from his time at David-Andersen, where one of their staples was archaeological revival pieces.

I believe the scene on the brooch is the dawn of Ragnarok, the great battle of the gods at the end of the world. Fenrir the Wolf, son of Loki, is bound in chains where that mighty waterfall drains the Northern World-Sea into the confluence of rivers that continually refills it.

One day Loki's son will be freed, he will quench an eternity of thirst, and then cast his baleful eyes upon the abode of the gods above, preparing for the attack in which Odin will die, and the current world cycle will end (or if you’re an optimist, it will be renewed).