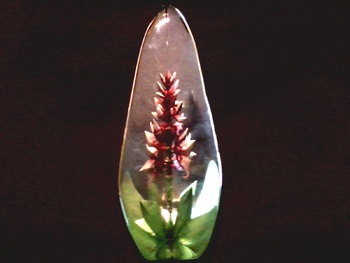 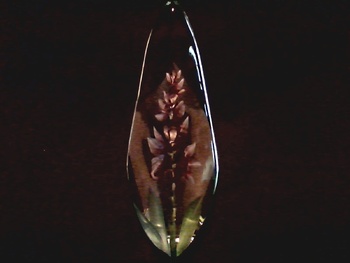 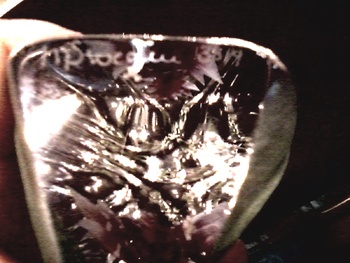 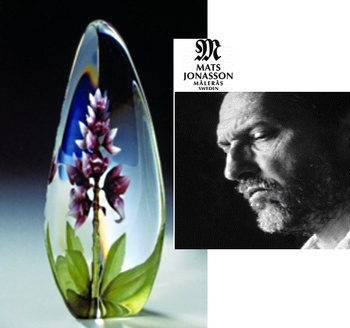 I found this beauty at Salvation this morning. Almost missed it because it was in the bottom of the jewelry case with a few other conventional paperweights. Not easy to see whats in there unless you are actually looking down from a distance. A large heavy 8 1/2" piece with a gorgeous deeply cut flower design cut into the angled portions of the back. Turn it to the front flat side and it becomes a 3D representation of a red orchid. I thought it was unmarked but as so often happens the etched signature was invisible until I got it home. It simply says MSweden 3819 for Maleras Glassworks Sweden. There might have been a clear Mat Jonasson label as well. Jonasson and Maleras still create many of these natural and fantasy floral weights today but this one is exceptional in my opinion. -Mike-

Maleras glassworks was founded in 1890 and produced window glass. Folke Walwing, who started as a glass engraver at Maleras in 1924, became its director and led the company until 1970. Under his tenure the company also produced everyday glassware and art glass. In the 1930s, the company became a major supplier to the Swedish Cooperative Association. Mats Jonasson worked for Maleras from 1959 until 1969, when he went to work for Kosta. He returned to Maleras in 1975. He was made art director in 1981, the same year that the employees and a lot of the villagers in which the glassworks is based, bought the company from the Kosta. In 1988, Orrefors tried to purchase the company, and Jonasson then bought enough shares to fight of the hostile takeover. Since then, he is completely in charge at the company, being responsible for both the artistic and commercial side. Ingeborg Lundin also worked at Maleras from 1989 until 1991, after she left Orrefors. All art glass is marketed under the name Mats Jonasson Maleras. The company also produces glass jewellery. Designers who worked at the Maleras and Mats Jonasson Maleras glassworks include: Hannelore Deutler, Lisa Larsson, Marianne Westman, Erika Hoglund, Klas-Goran Tinbeck and Robert Ljubez.Orchid Red Flower Etched Crystal Sculpture by Mats Jonasson. This crystal art glass sculpture is a work of art with its hand made, hand etched exquisite detailing. The highly detailed etching and sparkling crystal makes this fine crystal piece come to life.

About Mats Jonasson and Maleras Designers:

Mats Jonasson had the talent as a designer that attracted attention early on, when he started work as an apprentice engraver at the Maleras glassworks in 1959. Over the next few decades he worked with many of the most respected contemporary glass artists in Sweden. During this period, he developed that natural style of his which he's since perfected.
"Our forest have captured the hearts and minds of people since time immemorial," says Mats. Inspired by the natural world around him, he has opened his mind to create his distinctive masterpieces in the finest Swedish crystal. Nowadays, his art is represented all over the world.

Erika Hoglund was born in Sweden in 1971 into a family of artists, where glass and design played an important role in everyday life. As a child she was fascinated by the teamwork that existed between the glassblower and the designer and what they could achieve by working together on glowing crystal. With this background and a fiercely independent and often world and fantastic streak of creativity, Erika has opened up completely new perspectives in what can be achieved in the medium of crystal.

Robert Ljubez, after escaping the horrors of war in Bosnia, ended up in Sweden at the end of 1992. Experiences from engraving and drawing in combination with an artistic talent led to a job at the glassworks in 1996. At first, Robert Ljubez worked as an engraver, but he soon became Mats Jonasson's right hand man. Robert's time at Mats Jonasson Maleras has provided him with invaluable knowledge of the unexpected possibilities there are in working with crystal. A successful combination of curiosity and a great respect for the craftsmanship at Maleras has inspired him to create his own objects in crystal.

Klas-Goran Tinback is a studio glass artist who's been tempted to return to the warmth of the glassworks after a couple of decades away. His collection represents a bold foray into the world of the glass artist.

Tinback's works are on display at the National Museum of Fine Arts in Stockholm, the Rohsska Museum in Gothenburg and the Museum of Arts and Crafts in Berlin. His work has been exhibited in Japan, Brazil and the USA, as well as all over Europe.