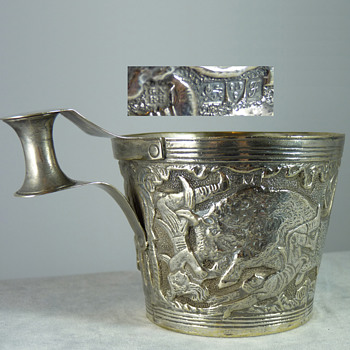 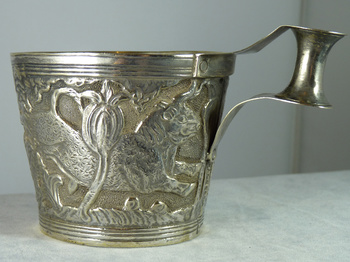 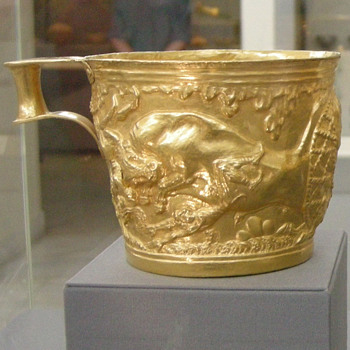 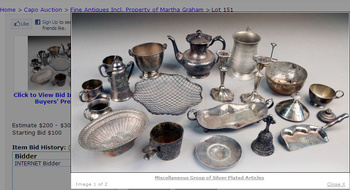 Although I hunt for treasure, sometimes I feel like the treasure has hunted for me. Here's an example of something I'd always wanted, that came to me in a quite unexpected way.

A very dear elderly lady friend of our family was tutoring my daughter in dance and refused to take any payment, so I was looking for a gift for her.

I searched a local auction site under "dance" (not one of my usual searches) and came across someone selling off items they'd bought in the USA, from the estate of the famous dancer, Martha Graham. They'd bought one lot of miscellaneous silverplate for about $100 and were piecing out the items at $50 each.

I saw a little silver bell that Martha could have used to start her classes and bought it for our friend, and then decided to try and find the original USA lot on my Live Auctioneers account. Sure enough it came up, you can see the entry in the last pic.

When I looked I was flabbergasted to see in the foreground something I'd always wanted, a Vapheio Cup. I'd already bought the bell, so had the seller's contact details - were they selling the rest of the lot? Sure enough they were just listing the cup for $50, no one else bid, and I got that too.

She danced and choreographed for over seventy years. Graham was the first dancer ever to perform at the White House, travel abroad as a cultural ambassador, and receive the highest civilian award of the USA: the Presidential Medal of Freedom. In her lifetime she received honours ranging from the Key to the City of Paris to Japan's Imperial Order of the Precious Crown.

Classical ballet dancers Margot Fonteyn, Rudolf Nureyev, and Mikhail Baryshnikov sought her out to broaden their artistry, and artists of all genres were eager to study and work with Graham - she taught actors including Bette Davis, Kirk Douglas, Madonna, Liza Minelli, Gregory Peck, Tony Randall, Eli Wallach, Anne Jackson, and Joanne Woodward to utilize their bodies as expressive instruments.

She said, "I have spent all my life with dance and being a dancer. It's permitting life to use you in a very intense way. Sometimes it is not pleasant. Sometimes it is fearful. But nevertheless it is inevitable."

Silver Cups and Goblets
See all