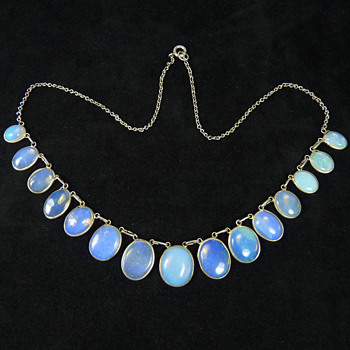 The first flourish of Lightning Ridge opal was quite brief, just nine years from 1905 to the outbreak of Word War One in 1914. Then mining virtually ceased as almost 40% of Australian men aged 18 to 44 enlisted in the armed forces, and trade ended with the German gemstone cutting centres.

These cutting centres in towns like Idar-Oberstein were responsible for processing most of the opal that reached Europe. One of their challenges with White Cliffs and Lightning Ridge opal was to create a commercial product suitable for the commodity end of the market.

Only a small percentage of opal is gem quality. Lower quality opal without strong play of colour right across the face of the stone was dismissively called "candle-box opal", so called because the miners would fill their empty candle boxes with it, and sell it to buyers for a few shillings a box.

The German gem dealers and cutters accumulated tons of this material, and then used their cutting skills to maximize the appearance and value of the stones. For years this gave them the stock to create attractive budget priced opals for the jewellery manufacturers of Pforzheim and beyond.

Some of the better quality pieces produced with this lower grade opal will be immediately recognized by collectors, as they're now quite sought-after.

One such style is these "spectacle frame" necklaces, made in gold or silver, that were very popular in the Edwardian period. They fitted into the Arts & Crafts and Art Nouveau fashion of the day, at a significantly lower cost than the high end pieces made by the "Art" jewellers.

This one's a favourite of ours because of its marvelous blue tinge. We picked it up at a half-price sale (off an already bargain price) from a very exclusive dealer who'd labelled it as moonstone.

It's actually jelly opal, which is transparent opal without much play of colour. In this case the attraction is not the variety of colour within the stone, it's the lovely blue body colour itself, which makes this a rather striking piece when worn.