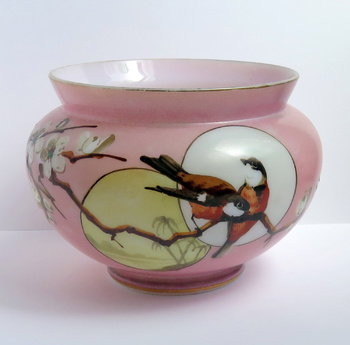 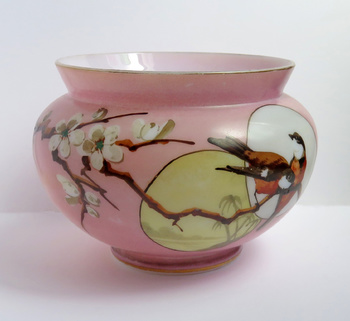 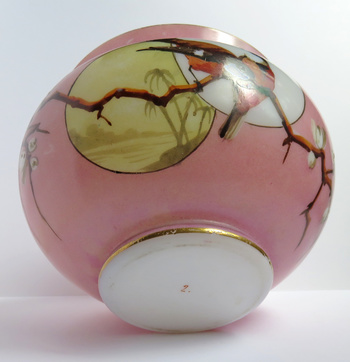 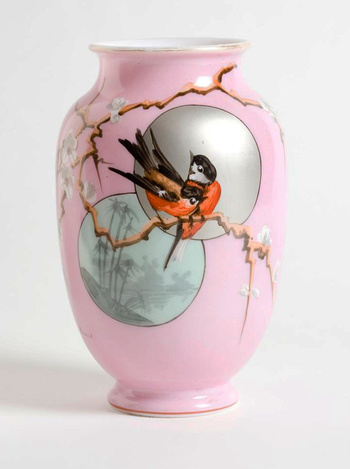 This enameled pink opaline glass vase or bowl is another example of the work of the Compagnie des Verreries et Cristalleries de Baccarat, in the Japonisme style that was very popular in Europe from about 1870-1900. The vase dates to about 1880, measures 3.75" tall x 5.5" in diameter, and is unsigned. In the course of my research into this vase, I came across a museum acquisition listing at the Chrysler Museum of Art in Norfolk, Virginia. They have a pair of pink Baccarat vases in the same decor, both signed 'Baccarat' to the lower left of the vase (see image 4). They are also numbered on the bottom in red, a color that Baccarat often used when numbering vases. My example has a red '2' on the base, as you can see in image 3.

The museum notes that the vases are "decorated in the "Aesthetic-Japanese" taste with enameled overlapping oval medallions. One vase has a pair of robins on a white blossoming (prunus-like) branch which extends over the pink and other medallion a faint gray-green Oriental landscape scene." (You can see the entire description here: http://collection.chrysler.org/emuseum/view/objects/asitem/People$00407876/21/title-asc?t:state:flow=bb11ec9d-9527-4dc0-b915-eb00f83e1d55)

Interestingly, it also notes how similar these vases are to a decor used by the Smith Bros. in the United States during the same time period. In researching Smith Bros. vases in this style, I have noted that the vases were often not very large, and were often designed for metal mounts, so the shapes included cylindrical 'ring' vases, and tear drop-shaped vases, also with molded rings to support the vase in the mount.