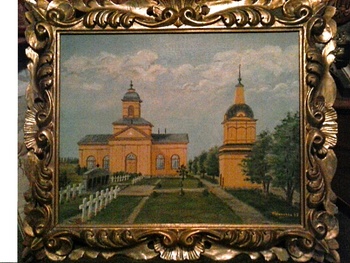 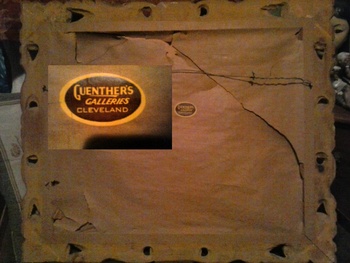 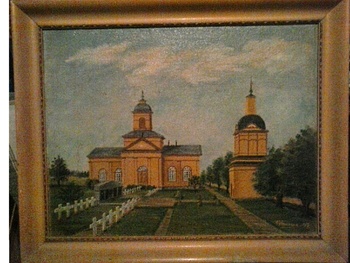 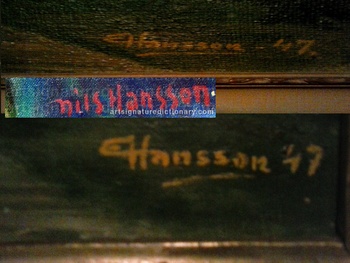 I was checking around Volunteer's of America looking for picture frames yesterday and picked up four interesting paintings. These are the ones I was paying for when I spied the Bitossi horse on the back wall at the register. Well it turns out that these two may just be something in and of themselves. Two almost identical landscapes. I've noticed one is a further distance and the clouds are different. Both are painted on artist's board and done in the same year. They're also slightly different sizes and very different frames. They're signed "Hansson" and this signature matches a listed artist on askart's site. Art signature directory's site also has examples of his signature over a span of years from 1950 to 1979. (see above pic for comparison). He's only using his last name on these instead of "Nils" and what looks like a tiny "E" at the top of the "H". His middle name is Edvin or Edwin. I think I may have found some of his landscape designs done after his return to Sweden. They're kind of atypical compared to of some of his other paintings, almost folk art like. There's a definite Cleveland connection as he went to school here in Ohio and graduated in 1937. By 1947 he was back in Sweden and primarily painting. I can't pin down the location of this building but it's probably a historical landmark. It appears to be a church or memorial. The architecture is typical of older Swedish buildings One painting still has it's original label on the backing paper from "Guenther's" gallery here in Cleveland. The Cleveland Art Museum also has some of his work. Quite an unusual find and mystery as to why there are two ! -Mike-

Nils Edvin Hansson, designer, sculptor, landscape architect and artist, born in Ystad February 3, 1900. Nils is best known as a painter, but did in the late 1930s, some figures for Upsala Ekeby and Gefle Porcelain, including the well-known "Gåslisa".
In the late 1910s, he devotes himself primarily to gardening and around 1920 he moved to the United States. He will start there own business as appraisers and starts while studying art, sculpture and painting at the Cleveland School of Art in Ohio and the Cranbrock Academy in Detroit. In the US he will also meet the Danish girl Karen (1906-1992) whom he marries in the US in 1932.
When Nils is a graduate in 1937, he brings Karen and moving back to Sweden. Except for a few jobs for Upsala Ekeby and Gefle, he devoted himself thereafter mainly to painting. Nils Edvin Hansson is represented at the Metropolitan Museum in New York, Cleveland Museum of Art, Moderna Museet in Stockholm and Trelleborg and Ystad museums. 1992 death of his wife Karen in Hagersten and four years later, October 28, 1996 the death of Nils at the same address.

The GUENTHER ART GALLERIES CO. was established in 1868 by Felix Guenther in the Old Forest City House Hotel on PUBLIC SQUARE. Over the years, the Guenther Galleries made a series of moves up Euclid Ave. to the Stone Bldg., the King Bldg., the Siegel Store Bldg., the site of the Cowell & Hubbard Block, the site of the Keith Bldg., and 1725-27 Euclid Ave. In 1934 the galleries made their final move, to the 2nd floor of the Kinney & Levan Bldg. in PLAYHOUSE SQUARE. The Guenther Galleries supplied objets d'art to many of the wealthy families of Cleveland at the turn of the century and boasted works by such names as Greuze, Parmiginano, Corot, and Daubignay. In 1931 the Guenther Galleries merged with the Leamon Galleries to become Guenther Art Galleries. In 1933 it was the largest exclusive picture store between New York City and Chicago, and it remained one of the Midwest's outstanding art galleries until the MAY CO. OF CLEVELAND bought its entire stock and sold it at an exhibition and sale on 22 May 1963.