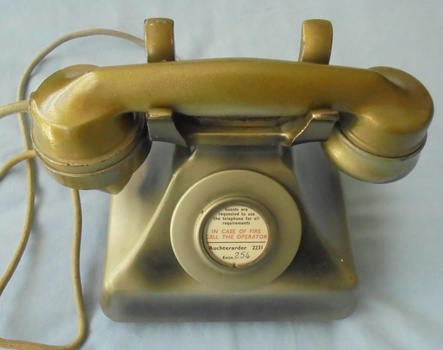 By chance I recovered all the surviving 1930s-50s telephones from Gleneagles Hotel, Perthshire, Scotland in 1986, when buying vintage mechanical wares for my theatrical props venture. LMS (London-Midland-Scottish) Railway were hotel proprietors in the 1920s-1930s and they commissioned "pewter & bronze" sprayed Gecophones for the sumptuous hotel decor of that era....famous golfers from all over the world playing and staying at Gleneagles. The phones supplied by GEC in Coventry, were primarily standard black bakelite stock, however a tiny few were unissued, experimental wine-mahogany hued bakelite prototypes. I salvaged the only known examples, unaware until I later inspected the phones fully...the insides of course not sprayed, revealing a glorious unknown colour version of this Gecophone. Various UK newspapers, TV and radio reported my find in the late 1980s. As you see, the dial label is Auchterarder 2231 and with dummy dial, typical of most hotel telephones...mere pick-up alerted reception to attend to one's requests. The phone's insides are immaculate, while the paintwork has suffered just a little here and there after decades of use. They were decommissioned in 1974-75, the year Gleneagles Hotel was fully refurbished - its 50th anniversary...built by Caledonian Railway in 1924.
I use it as an extension on my desk, alongside a Chinese Red Siemens dial model pyramid mounted on red bellbox (also incredibly rare and found elsewhere, again by pure chance...see it on this site).
A pleasure to share this information with fellow period phone enthusiasts !