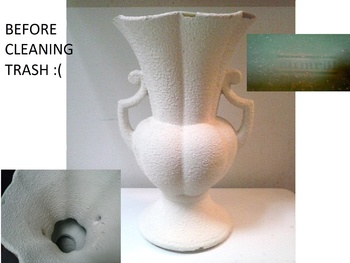 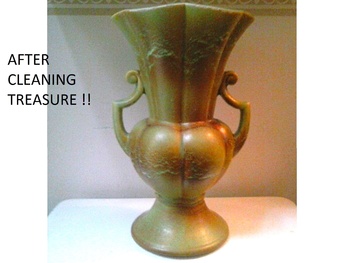 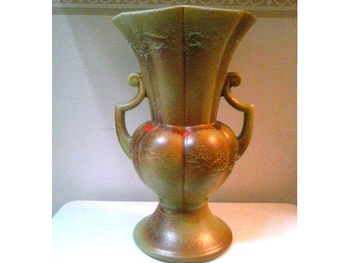 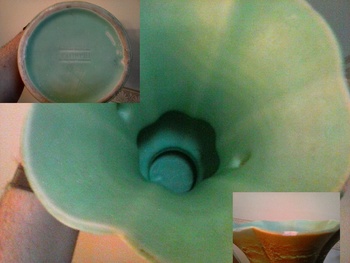 I spied this on the window sill at Salvation Army this morning. I wouldn't have given it a second look but I noticed the white stucco coating was chipped and a bit of turquoise blue was peeking through. So I picked it up and turned it over. The bottom was the same turquoise and there was a mark "Rumrill". Now I knew about George Rumrill's designs for various Ohio Potteries I just couldn't figure out why anyone would slather this ugly white stucco all over it. To hide damage possibly ?? A liberal dose of citrus stripper followed by a good soaking and the true beauty began to emerge. The coating was latex based so it peeled off a little bit but I mostly wore my finger nails down carefully scraping it off inch by inch. Even the interior was coated with the gunk. I spent about four-five hours to complete the job. Now I have a beautiful 13" olive and turquoise drip glaze vase. There are even splashes of bronze and orange in the mix. Some tiny chips to the rim that were hidden by the coating but not too bad considering what it's been through. What a job ! but... What a vase ! -Mike-

In her book RumRill Pottery, the Ohio Years 1938-1942, (Collector Books, 2008) author Fracesca Fisher features her private collection, which is extensive, but also details the history of this small company.

RumRill Pottery was the brainchild of George Rumrill, a Texan whose forte was sales. Fisher said no one really knows why Rumrill turned to pottery, but one of his earlier jobs in 1926 was as a sales manager for the Louis Schneider Candy Company, Little Rock, Ark. For reasons unknown, in 1930 he started the Arkansas Products Company which sold art pottery such as Niloak and Camark.
Over the course of the next two years, Rumrill began producing a line of pottery under the RumRill name but it was not manufactured in Arkansas, though the RumRill Pottery Company did have offices in Little Rock. Rather, Rumrill farmed out his designs to be manufactured at established companies such as Red Wing in Minnesota and Shawnee, Florence, and finally Gonder – all located in Ohio. By doing so, RumRill Pottery suffered its share of woes.
It was 1931. Red Wing was tired of its everyday ware and wanted to produce art pottery. A deal was made between Rumrill and Red Wing that Red Wing would manufacture art pottery under the RUMRILL name over the course of a five-year period. Red Wing filed for trademark protection for “Rum Rill” in 1935. Through research, author Fisher found “that George Rumrill assigned his ’RUMRILL’ trademark to Red Wing Potteries in 1936.”