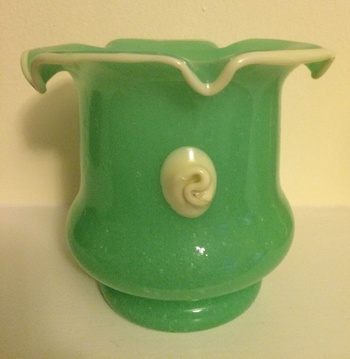 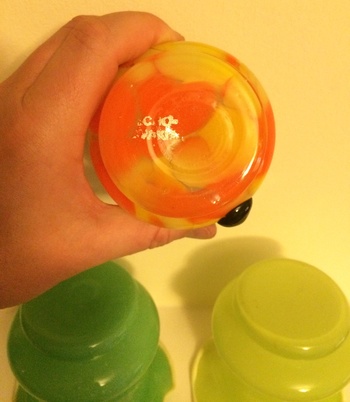 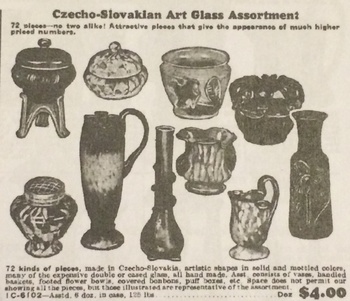 I recently obtained these green to go with my spatter with leaves. Fish, Al and Anne have both similar vases with 5 "petals" and trails with these reverse S-shaped prunts. MacArt posted a gold Kralik vase a few years ago with very similar.

A link is in the Butler Bros catalogues from the WVMAG - however the photographic reproduction isn't brilliant yet what looks like a honeycomb or spatter like the middle vase is shown amidst a group which would until very recently have been definitely Kralik.

This and one other group on p22 (1930) is annoying for having very Kralik-y vases shown - like applied flowers - yet the vases themselves aren't very reminiscent of other Kralik glass. Does the paradigm that single companies are represented in these vase groups need challenging?

Certainly the pinched handled jug in the same picture looks very similar to an accepted Kralik décor but an example in my possession has no pontil mark, making me doubt it is Kralik, unless they moved away from techniques that left pontil scars, which doesn't seem likely at present.

So some parallels but more questions than answers on p22! The one thing we can be sure about at present is that these are Czech!

If anyone has any similar silver marks, I would be grateful to see them or be reminded!