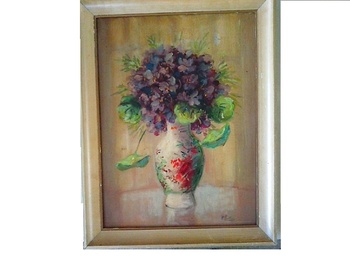 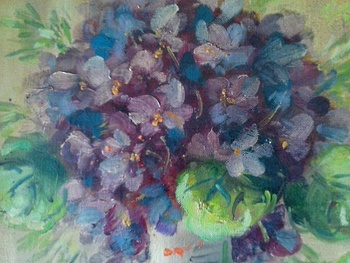 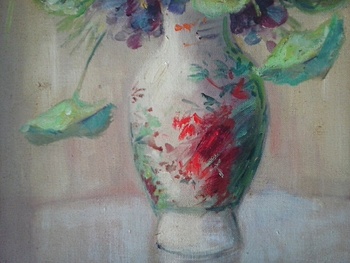 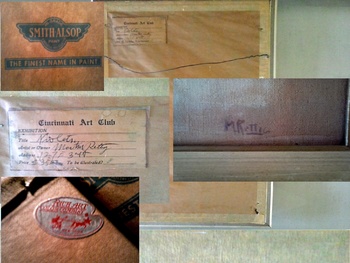 My usual stop to Salvation Army on Mondays is generally uneventful. Today however I spied this little oil painting tucked in the book rack they use for empty frames and other odds and ends. I thought it was nice and the label on the back seemed to indicate that it had some age. So when I got home and typed in Martin Rettig on the computer. The search bar lit up with artist and painting references. I could not believe he was an important decorator for Rookwood along with his brother John. The paintings reflect his studies for many of the pottery designs he painted. There was even a very similar one to this that was auctioned at Humler & Nolan in Cincinnati in 2012. The label on the back is from the Cincinnati Art Club. He was president of the club from 1918-1920. The canvas panel is from the Rich Art Color Company founded in 1926. The backing papers logo on the other side is from Smith Alsop Paint which was first used 1924. So this painting probably dates from the late 20's to early 30's. It appears to be the original frame as well although I'm not terribly fond of it, kind of plain for my taste but a definite score as far as the painting goes to say the least. -Mike-

Martin Rettig (1869-1956)
The younger brother of John Rettig, Martin was well known as a painter and a Rookwood Pottery decorator. He worked at the Rookwood Pottery as a decorator from 1883 until 1885. As a painter, he specialized in floral pieces. Rettig studied with Duveneck and later was considered to be an authority on the works of the master. Rettig was the president of the Cincinnati Art Club from 1918 through 1920.