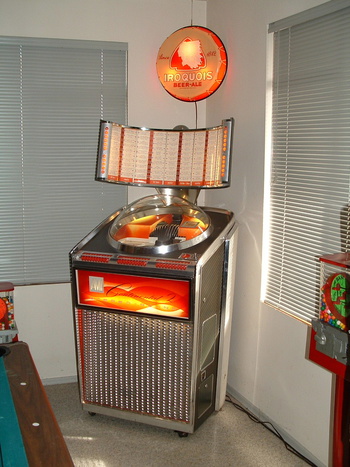 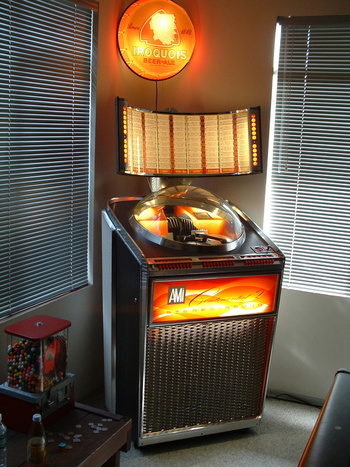 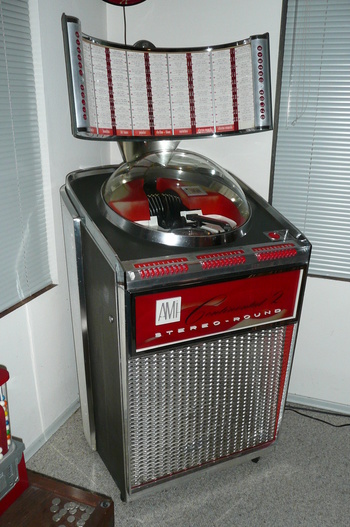 Here are a couple of pictures of my 1961 AMI Continental 2 jukebox.....AMI made two of these 'spaceship' models, the first one in 1960 called the Continental and this one (Continental 2).....they look almost the same except the first one had a large star in the grille and was mainly turquoise in color and most of the first ones were mono.........The Continental became very popular in the early 1990's when one was used in the hit movie 'Ghost'. The AMI Continental's were the only american jukeboxes ever made that look like they come out of Star Wars/StarTrek. When the song is selected, a large drum rotates until the selection is top center, the drum then stops, and a gripper arm grips the record and pulls it from the drum, and puts it on the turntable in the center of the circular glass dome....the record and tone arm are 100% visible. Above the body of the Continental jukebox is a 'radar dome' that holds all of the title strips. The Continental has a couple of large speakers behind the front grille and a smaller speaker on each side of the jukebox pointing outward, so it has great sound when its placed in a corner, as the sound seems to 'surround' you. The AMI Continental is a jukebox you either Love or Hate (as far as the styling goes).....an AMI Continental was my first jukebox and I loved it from first sight!