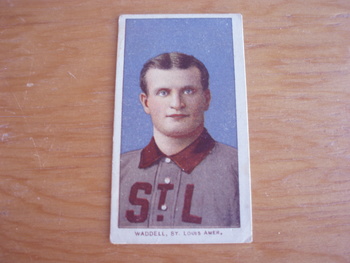 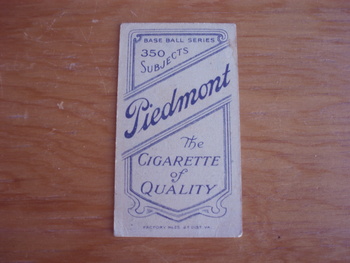 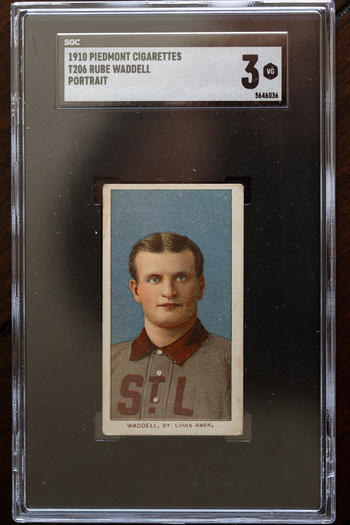 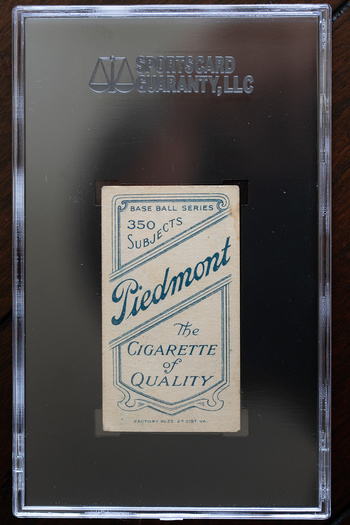 One of my favorite collectibles is food or tobacco sports and non sports cards or plastic coins. Being from the prairie provinces of Canada hockey and non sport premiums were always plentiful with very little old baseball cards to be found. When I came across this baseball card and saw that it was a tobacco premium it was added to my collection. It wasn't until some time later I found out some information about the 1909-1911 T206 baseball cards that I decided to read up on the history of this famous baseball card set and about the card I had of Rube Waddell. Here is a short history of Rube Waddell:

Waddell was a remarkably dominant strikeout pitcher in an era when batters mostly slapped at the ball to get singles. He had an excellent fastball, a sharp-breaking curve, a screwball, and superb control (his strikeout-to-walk ratio was almost 3-to-1). He led the major leagues in strikeouts for six consecutive years.

Rube Waddell never lived to see his 38th birthday as he got very sick doing something he had done more then once over his short life, helping people in their time of need. In 1911 when a small Kentucky town was flooding Rube stood in icy waters for hours stacking sand bags for the levee.
As a result, he contracted a severe case of pneumonia. His system weakened, Waddell soon became a victim of tuberculosis. He pitched one more season for Minneapolis and a part of another with two teams in the Northern League but by November of 1913 his health had reached the critical stag.
Connie Mack was Rube Waddell's General manager for the longest of Rube's pitching career and when Rube was in the hospital it was Connie Mack who advised the hospital staff to give Rube Waddell the best care possible no matter what the cost.
There is much information written about Rube Waddell not only about his feats in baseball also his colorful life away from the field. Rube was a crowd pleaser who when scheduled to pitch would usually more then double ticket sales.
Rube Waddell's name will continue to live on with other legendary baseball hall of famers for years to come.