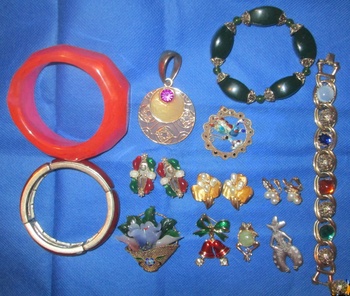 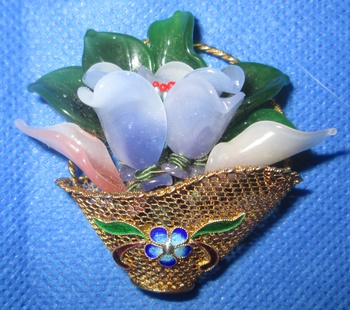 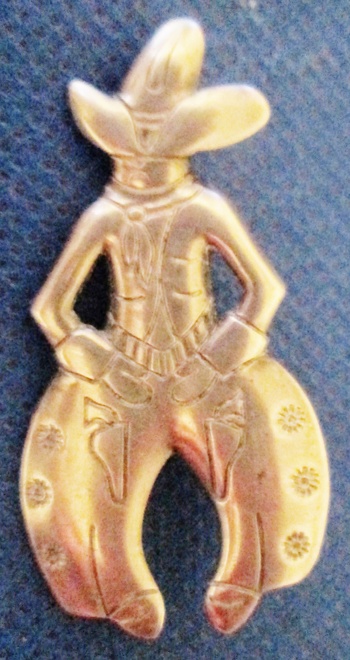 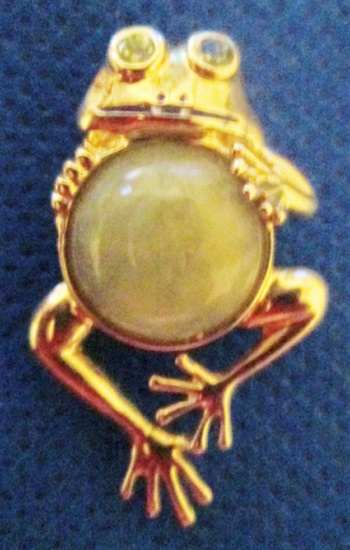 So let's jump right in, shall we? I was at the swap meet on Saturday, and came across a middle-aged man who had a table covered with jewelry he was selling: "Fifty cents a piece." I took a look and realized he had some good stuff in there, so started picking through and before I knew it both my hands were full. Other people had come around and he gave them the same answer, fifty cents a piece, he said it was his ex-wife's jewelry and he just wanted to get rid of it. At those prices, a few people were picking through with me. Another lady had chosen some bits and was finished before I was, so she took her handful of treasures over to the man and he started counting them out. I heard her say, "Wait a minute, that's a pair of earrings, why are you counting each one?" He said, "Because I said fifty cents a piece, each of these is a piece." The lady said, "Oh come on, they're a set. I have two ears, I need two earrings, that's a set." But the guy wouldn't budge. This of course interested me as well, since I was choosing earrings, still even at fifty cents each, that's a dollar a pair, why complain about it, just had to make a mental adjustment now that I saw how he counted -- when he said a piece, he meant a piece, lol. And to be fair, there were some single earrings on there, surely no one thought he was selling those for twenty-five cents! So the lady pays, unhappily, and as she moves off (I should say all of this was taking place behind me while I was still picking, I was listening in), she stops at the pile of clothes the guy is also selling and asks, "How much for that pair of jeans?" The guy says, "One dollar." The woman says, "Two dollars, two legs." I started cracking up, turned to look at her. She was standing there staring him down, tall thin woman, nicely dressed, frowning before she stalked away. I said to the guy, "Burn!" He kind of smiled, and said, "I don't want to be rude." I said, "No, she burned you. She burned you down to the ground." He wasn't bothered, the kind of guy who took everything in stride. So I bought the pieces I chose, that's everything you see in the first pic, he sold it all to me for eight dollars. Okay, now some of you guys know our Bonnie is always posting jewelry on here that's either solid gold or sterling silver that she gets for a few euros, and it sizzles my gizzards, lol. I thought to myself, that has never happened to me and probably never will. Who'd be dumb enough to sell their jewelry without checking for maker marks and for hallmarks? Well guess what, I was wrong. The basket of flowers pendant in the second picture is vintage sterling silver gold gilt. (I will post a link to another I found online.) The third photo is of a vintage sterling silver cowboy pin, marked Bell Sterling. (I will post a link to another I found.) The fourth is a 10K gold pin with jade belly and peridot eyes. (I will post a link to another I found.)