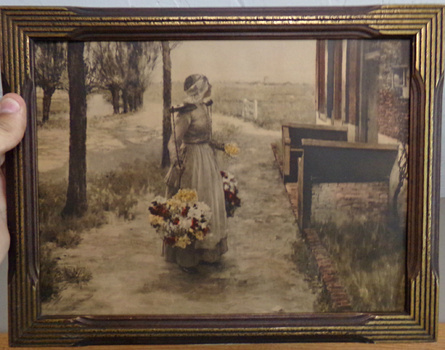 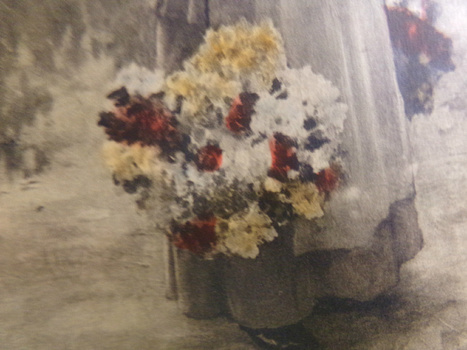 While Reinthal & Newman had all the lithograph capabilities to tint this via machine as deeply as wished, apparently they decided that the colours did not come out vibrant enough and desired that the flowers 'pop', so they tinted the flowers by hand. Other colours are so muted that you barely notice they're there.

They began making postcards in 1906 and moved onto lithographed wall-art by 1920. Production ended in 1928. Before all that, the infant company that became them had sold frames and mirrors. It appears they still dealt in nice frames, as this simple Art Nouveau frame is subtle in design but fits well and to me is worth the $7 I paid.

The cardboard backing of this photo was in such incredibly poor shape due to acidification and water damage that it has permanently stained the back of the quality image and was a pain to remove as it swelled around the finishing nails that held it in.

New white acid-free paper has been added between the back of the photo (to absorb acids) and a new piece of cardboard that has been cut to size. Looks original from behind, but if someone one day took it apart again... they'd see a ShopVac advertisement on the other side of the cardboard. LOL.

Hopefully the print will not further darken as it is now safe.