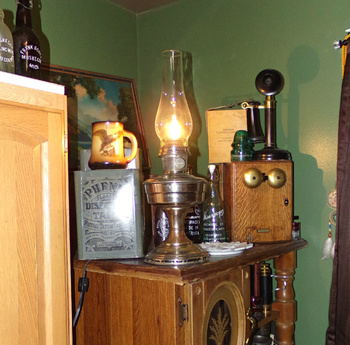 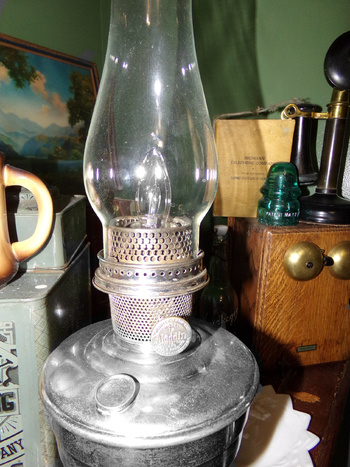 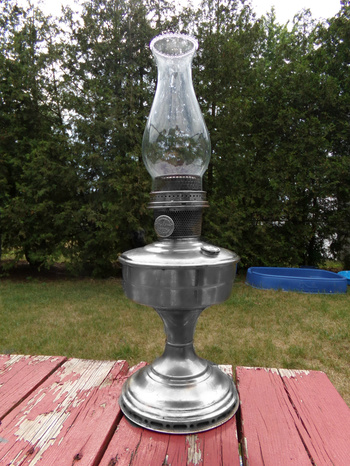 Some of you may remember the damaged c. late 1920s Model 12 Aladdin I posted several months back.

Though I fixed the badly beat-up and modified burner, the lamp was still corroded from heavy use and age. It was merely a background display item in the house, until one day when I was cleaning.

And before anyone gets mad, No, I Didn't cut or drill any holes into the lamp. It is in no way damaged by me.

There was a lamp I used to back-light some bottles, but the lamp was out-of-place as a bright orange plastic thing among (though hidden behind) some antiques. I was cleaning atop the wooden 'thing' you see this lamp on in my room, when, suddenly, I became inspired to remove the socket and stick it in my well-loved Aladdin (as for why, I don't know, for I was just dusting and was no where near the old oil lamp).

So, I took a break from cleaning and ripped apart the more modern orange lamp (I didn't want to have to cut the cord, but eventually had to so as to put it in the Aladdin), strung the cord through the open centre-draft and perforated designs along the bottom rim, screwed in the candelabra bulb, taped up the cord, and plugged it in.

Voila! I gave the formerly badly damaged (burner was crushed when I bought it) Aladdin a new life of use, and in a way that can be undone without leaving any sign of what I did.

Now I just need the ring to hold the diffusing shade around the globe, as this bulb is blindingly bright. I have a correct (oddly, very heavy) shade, but no spare holder. I'll likely have to solder one together, though I really don't want to.

Again, this came totally 'out of the blue' whilst I was cleaning. While the vacuum was still in the middle of the next room, I was sitting on my floor tearing apart a lamp. How random!