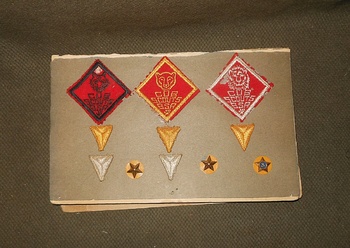 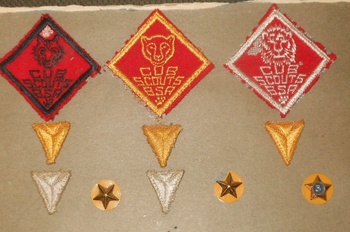 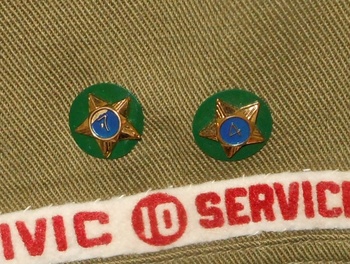 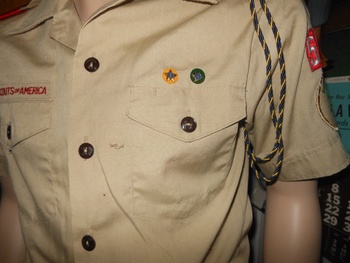 More scouting stuff I fear but moving right along. Service pins are one of the items I have been looking for. Those would be the small circular objects with the stars. To back up a bit Brunswick posted a bottle tree which sent me to Oro Grande home of Elmer's Bottle Tree Ranch. Saw some interesting items but not really anything I was really looking for. There were some unusual insulators but I forgot which ones I already had and these were not $3 each. I will make a list and return. As that turned out to be dry hole I proceeded to Barstow and found some great scouting items from the 1950s. The only dated piece was 1954 which was sash filled with merit badges and other pins, a cub scout knife and this card with cub scout patches and service pins.
The focus here is the service pins. They have remained unchanged for years aside from 1 years pins now having a "1" on them. The original 1 years pins are plain. Cub scout pins have a yellow background and boy scout pins have a yellow background. Earlier I mentioned that the Arrow of Light patch was the only Cub Scout item that could be worn on a Boy Scout uniform. Not true as the Cub Scout service pin can also be worn. I do believe that only one Cub Scout service pin can be worn. The 1 year pin would be replaced by a 2 year pin. Also Boy Scout could not wear a 2 year pin and a 3 year pin.
In photo #4 the faux boy scout has a 3 year Cub Scout Service Pin and a 4 year Boy Scout pin. That means 3 years in Cub Scouts and 4 years in Boy Scouts. The 7 year pin seen in photo #3 is difficult to attain in Boy Scouts as it is generally ages 11-17. Stars are awarded in the later stages of Scouting such as Explorers and Scout Masters. Too much information for now so sticking with the Cub and Boy Scouts.
More Scout items to come plus the all the items for the 1980s Scout Uniform are here. I just need to sew on a couple patches so stay tuned. Also there will be toys and stuff. 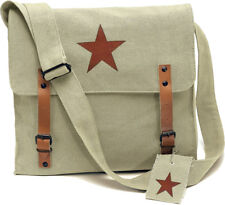 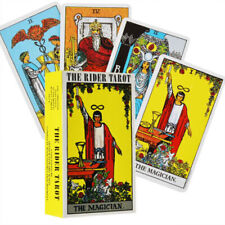 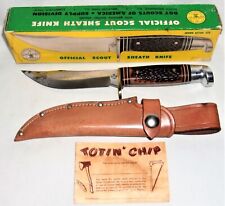