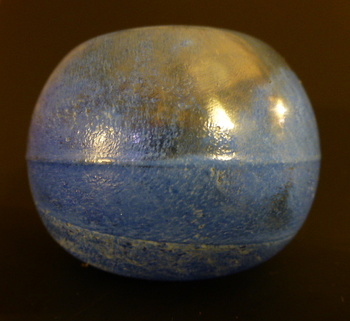 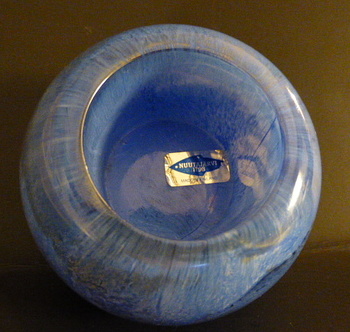 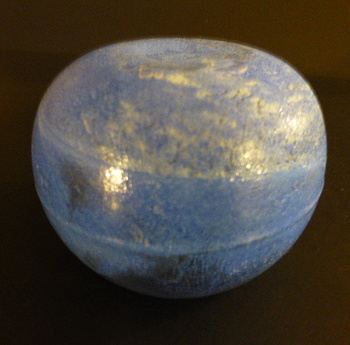 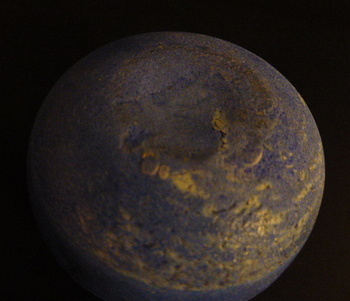 This Finnish made candle holder is 2.25" high x 3" in diameter. A $.99 thrift shop find today. I had never heard of the glassmaker before and no one has posted anything by them to CW so including some history. These little candle holders appear to be fairly uncommon. This one has a very odd finnish (pun intended). The top 1/3 to 2/3 is polished but the remainder and the bottom are rough and un-polished. I knew it was good glass when I picked it up but had a "Huh!?" moment when I peeled the thrift shop price tag back and saw the maker's label. I moved the label to the inside so it won't get lost. From the bottom, it kind of looks like the Earth when viewed from the Moon. Nice addition to my pile of candle holders.

Nuutajarvi
The Nuutajarvi glass village was founded in 1793 by Jacob Wilhelm de Pont and Harald Furnhjelm. The location was chosen for the its forest resources, as firing the glass required vast firewood. While many glass factories were popping up around this time, Nuutajarvi still stands out from the others. Why? Because up until its close in 2014, it was the oldest working glass factory in Finland.

Nuutajarvi merged with iittala in 1988, and it is where Oiva Toikka's glass birds were made for forty years. Though production has since moved to iittala's main factory in Finland, the birds are still handcrafted and mouth-blown by iittala's master glass blowers. Toikka's beloved Kastehelmi (Dewdrop) glass products were also produced at the traditional Nuutajarvi factory.

Oiva Toikka isn't the only famous Finnish designer with close ties to Nuutajarvi. Kaj Franck was the art director of Nuutajarvi glass village until 1973, and many of his designs also passed through the fiery furnaces. It was because of him that Nuutajarvi gained such an expertise in working with the colored glass, making those pieces a sought-after collector's item today.