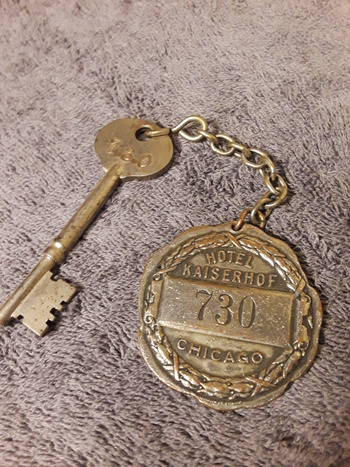 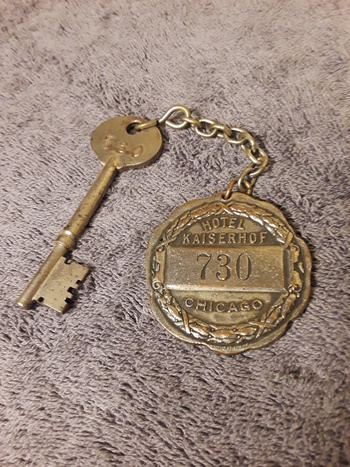 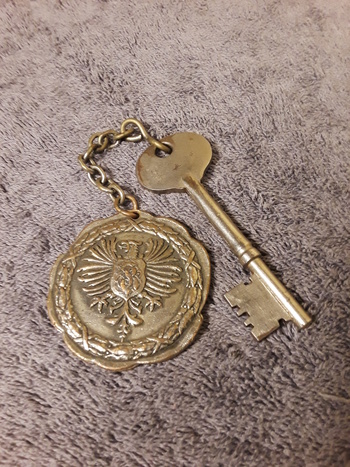 I've had this for ~40yrs probably, having found it at some or other sale somewhere (best as I can remember anyway) when I was a teenager. I thought it was pretty cool then (it must have also been way-cheap or otherwise buried in a boxful of other junk, if I could afford it?) and I still do. :-) (plus, I've always liked old locks and keys anyway, but that's just an accidental fact...)

What I no doubt didn't know about it then, but which a quick Google search now reveals, is that HOTEL KAISERHOF apparently existed as such from roughly 1889-1915 (as an 8-story hotel building) on Clark St. in Chicago, when an 18 story addition was built adjacent to the original structure and the whole thing changed names to THE ATLANTIC HOTEL shortly thereafter. The building(s) apparently continued to survive until 1971.

The key itself is a little over 3" long, on a couple inches worth of chain/links to its cast metal fob roughly 2" across. The fob itself is rather heavy for its size (>1/8" thick) and kinda seems to be made of copper (or a similarly colored metal alloy) with an outer silver-ish plating which is now a little more 'worn off' than it was when I first got it -- that's no doubt my fault as I actually *did* use it as my own keychain for awhile back then. [again...I thought it was way-cool, even without having a clue how old it really was, thus how I shoulda probably been *much* more careful with it...? <groan>]