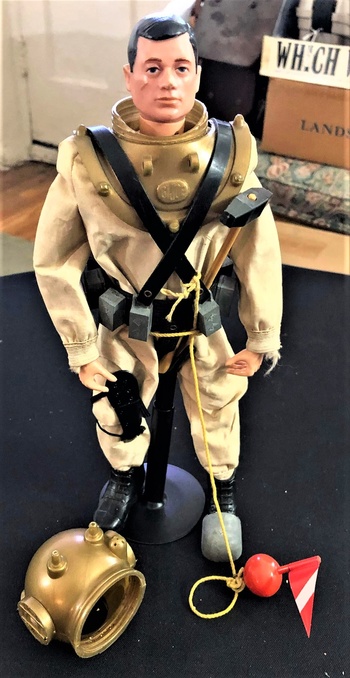 It's been awhile since I've posted anything. I'm still actively collecting toys from my era 1960's and 70's. I have always liked the early Gi Joes as I was around 9 years old when they first came out in 1964. Slowly over the years since then I have got back into picking the figures up. It's fun and a good way to enjoy retirement. This is one of my recent buys to fit in with my small collection.
The figure first came out in 1965 and carried on through up to 1973 when it continued in the Adventure Team Lineup going through minor changes. The very first set had a white flag with the buoy along with square toe metal weighted boots. My diver is not a first edition as the flag is red and weighted boots rounded although it is still an early issue. The suits are coated with a rubberized interior which over the years tends to harden and disintegrate basically turning a white powder which flakes and falls off. I have one such suit that this happened to. This one in the photo has kept it's texture and not dried out. It's fun searching the Joes out as they turn up in the strangest places at times.