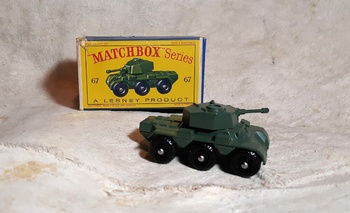 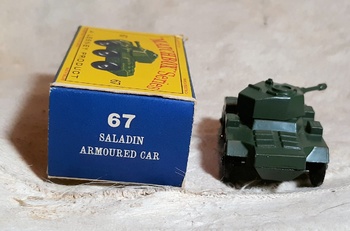 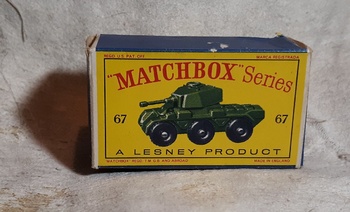 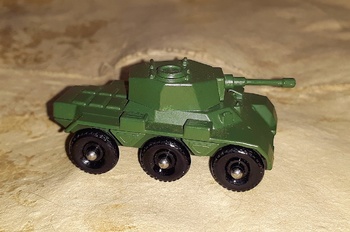 The Saladin Armored Car had a very long run with no changes aside from the box. It was first introduced in 1959 and was in the catalog through 1967. That is 9 years. Most models got 3 or 4 years. I believe it was the last of the military models until the 1970s. I think its tank like appearance with 360 rotating turret helped.
The actual version was well armed for an armored car. It had a 76mm cannon which fired an excellent high explosive round. Not so much for armor piercing but high explosive in more useful for vehicles like these. There is also more than an inch of armor which is fine to protect against small arms and artillery.
Now back to the model and the box. The box is a D style box which was used from 1961-1965, and until 1967 in some cases. In this case it may have had the D style until 1966. The E style box was used for this model for at least one year. But the end flaps on this box have the serif style lettering making this an earlier box. Exactly when they ran out of the early D style boxes is unknown but this would be early 1960s.
Got the new models for the next 2 Matchbox Mondays lined up so stay tuned!