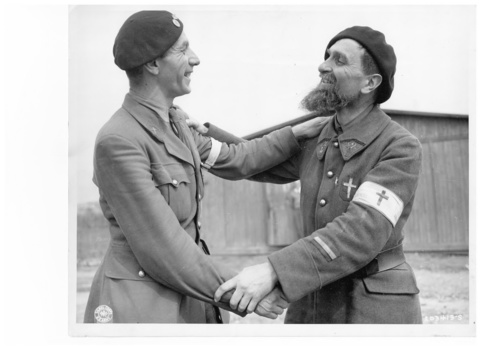 A World War II photo found among my Grandmother's possessions. My father served in the U.S. Navy during the war, and though he kept very few mementos of his wartime experiences, he perhaps sent this to my Grandmother. She was a friend of a Priest who had served as a Chaplain in the Belgian Army during World War I, and though this Chaplain friend was deceased by the time the United States entered WWII, his memory was cherished....I present this photo in thanksgiving for the great generosity of Military Chaplains everywhere, especially for these two fine Chaplains pictured, and for their valiant liberators -the 2nd Armored Div., U.S. Ninth Army! 4/11/45

MESSAGE OF REVERSE OF IMAGE READS:

"A Belgian chaplain, left, and a French chaplain, prisoners for five years at the Nazi Camp in Hollendorf, congratulate each other upon being freed by the 2nd Armored Division, U.S. Ninth Army. ETO 4/11/45"

RELEASED BY THE AUTHORITY OF THE BUREAU OF PUBLIC RELATIONS OR BY THEATRE PRESS CENSOR."

Thank you for looking!