Photos From the Front: Veterans You Love 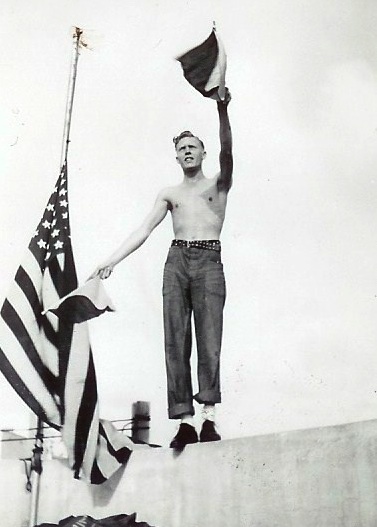 Today, America honors its military veterans, who have served our country in times of war and peace. If you want to delve in the human side of our U.S. military history, look no further than Show & Tell, where militaria collectors like scottvez share their collections and knowledge about hats, medals, and badges, as well as photos, letters, and trench art they’ve stumbled across.

Many Show & Tellers—U.S. veterans and families of veterans—have been generous enough to share their personal military histories with us. Today, you, too, are no doubt remembering someone you know, either a family member or close friend, who’s fought for American freedom. Servicemen and women on Collectors Weekly, we salute you!

“My grandfather, as an 18-19 year old kid, voluntarily threw himself in the middle of the war.”

Marcobabe may have the oldest family war memento on Show & Tell, a canteen her great-great-great-grandfather Ichabod Sheldon carried in the War of 1812. She tracked down the lineage of this piece via Ancestry.com, where she found a War of 1812 Service Record. That document revealed that her third great-grandfather was mustered into the New York Militia between 1812 and 1815, so it seems likely that Ichabod gave the canteen to his grandson, Cassius. 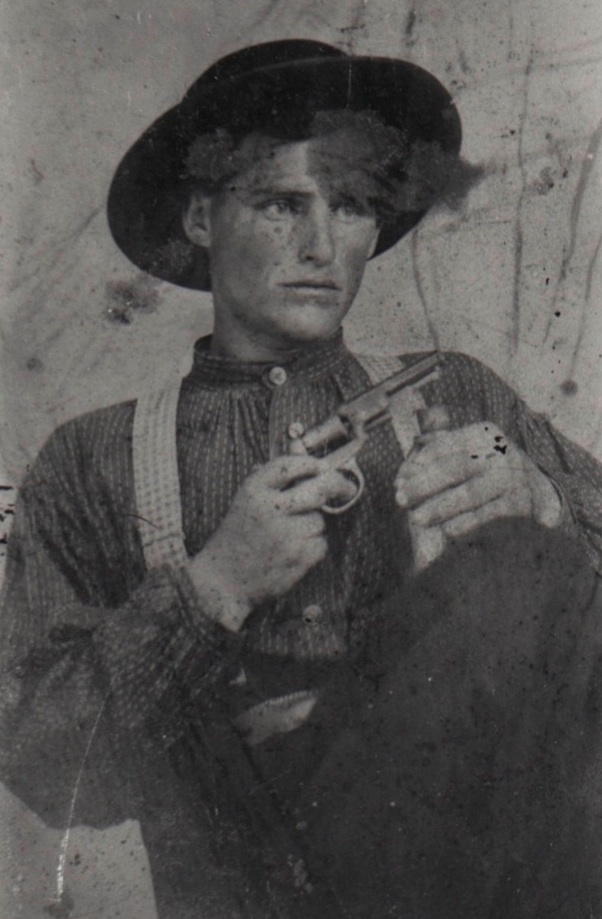 Marcobabe’s most recent solider photos date all the way from from the Civil War. They include a tintype of her great-grandfather Cassius as a young man (above). She says, “I suspect this photo was taken before he went off to the Civil War in 1863 at the age of 18. I have an original letter he wrote to my grandfather Calvin in 1911. He writes of his half-sister Laura ‘rattling gab that no one could get a word in edgewise.’ My husband would say some things never change!” 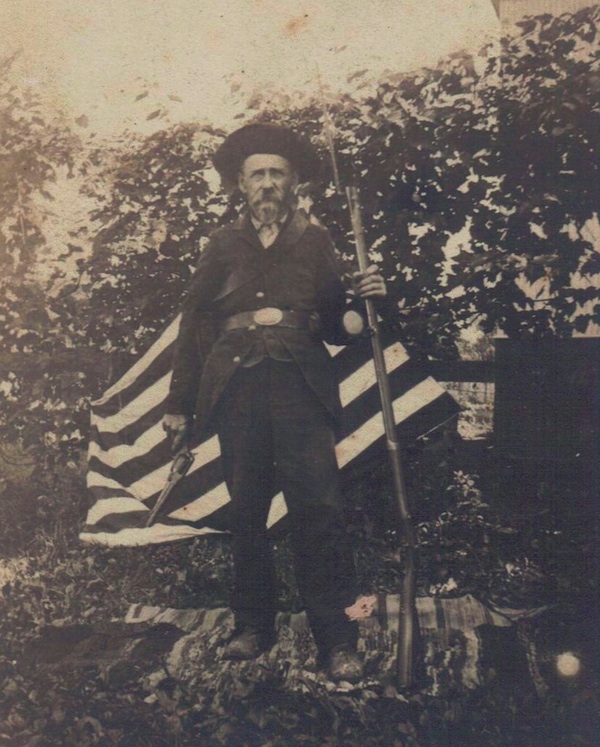 Savoychina1, who helped reunite a Japanese family with their World War II letter, was also generous enough to share a rare Civil War heirloom, a photo of his great-grandfather, George Butler, who served with the Union. 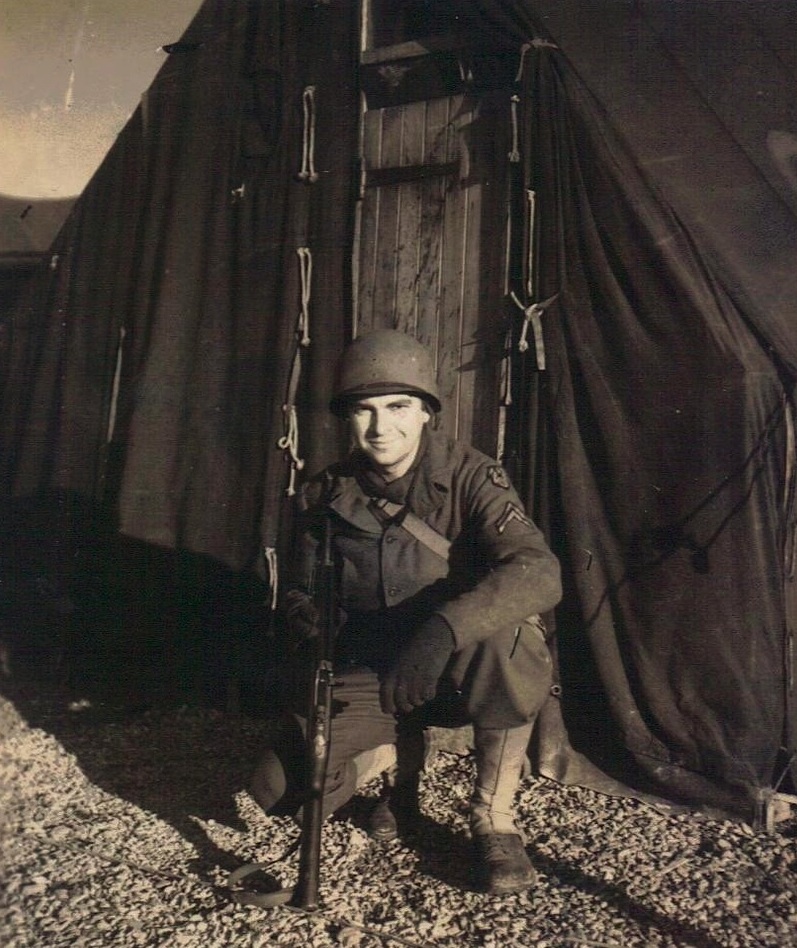 A century later, Savoychina1’s father displayed the same sort of patriotism, fighting U.S. enemies in World War II. “He never once mentioned his service while I was at home.” 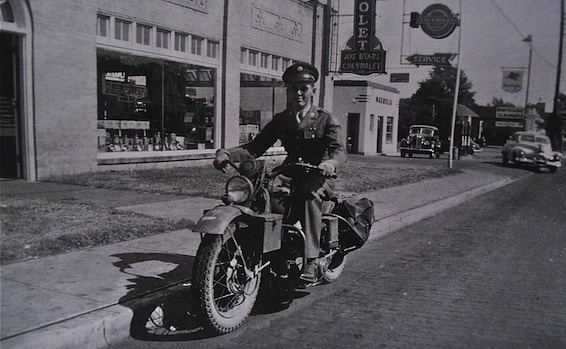 When Signaholic‘s Dad wasn’t overseas working on U.S. Army planes in World War II, he was cruising around the streets of Tyler, Texas, on this sweet Harley motorcycle. 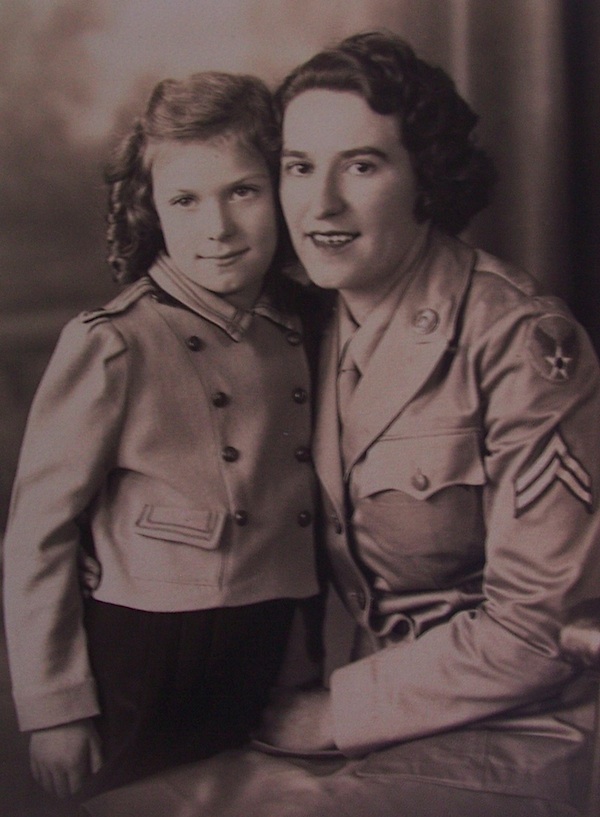 Women, too, served the United States as WACs, or proud members of the Women’s Army Corps. Cindyjune shared this picture of a family friend and her daughter, who is dolled up in a uniform-like blazer. Like mother, like daughter! 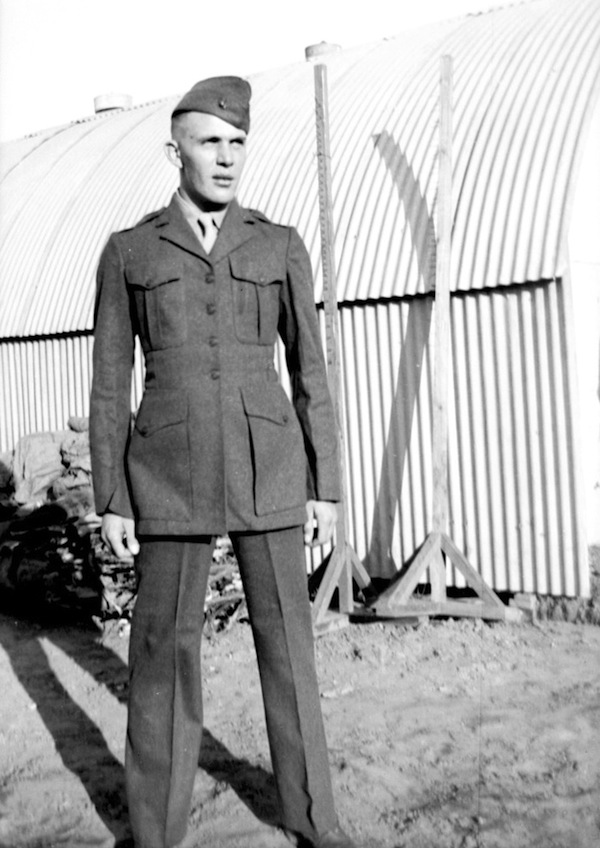 Fourpeepsake‘s father served in the Marine Corps during WWII. “From the looks of that GI haircut, this picture was taken shortly after his induction into basic training at Camp Lejeune in North Carolina, September 1942.” He looks considerably more laid back rowing this canoe. 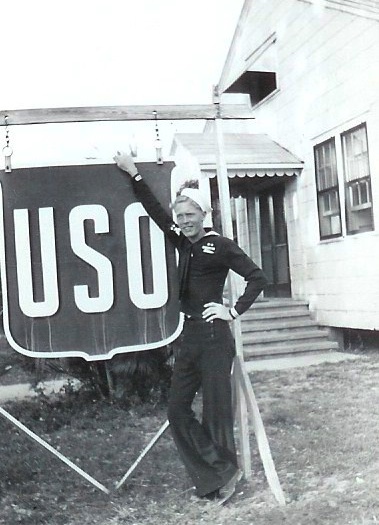 VikingFan82 has posted many tales of his grandfather’s adventures. It seems as though he was quite the swashbuckling and patriotic young firecracker. In a post titled “All-American Badass,” VikingFan82 shows his granddad fooling around with a Japanese rifle in his backyard, and standing tall in Casablanca in 1945 (see photo at top of this article). In the photo directly above, the fresh-faced sailor is about to be sent off to war.

“We were attacked by kamikaze suicide planes. One plane dove almost straight down at the ship.”

In another post, VikingFan82 explains that his grandfather served aboard the Landing Ship, Tank 339 between 1943 and 1945, which went on the following missions: The consolidation of the Southern Solomon Islands, the New Georgia-Rendova-Vangunu occupation, the Vella Lavella occupation, the occupation and defense of Cape Torokina, the Hollandia operation, Biak Island Operation, and the Morotai landings.

“He was mainly a signalman but found himself at the gun one night and had to defend the ship against a Japanese fighter plane. He shot her down and was awarded a confirmed kill during the Vella Lavella occupation. These pictures (of the ship) were not taken by him; I found them online. It is crazy to me to think that somewhere in these pics, could be my grandfather, a 18-19 year old kid, who voluntarily threw himself in the middle of the war.”

On Show & Tell, VikingFan82 tells his grandfather’s story through a series of keepsakes, including his blue-star banner, his liberty pass, his medals, his sailor hat, Moroccan and Japanese currency, a Jumbo postcard, and pictures of him on his postwar Harley. 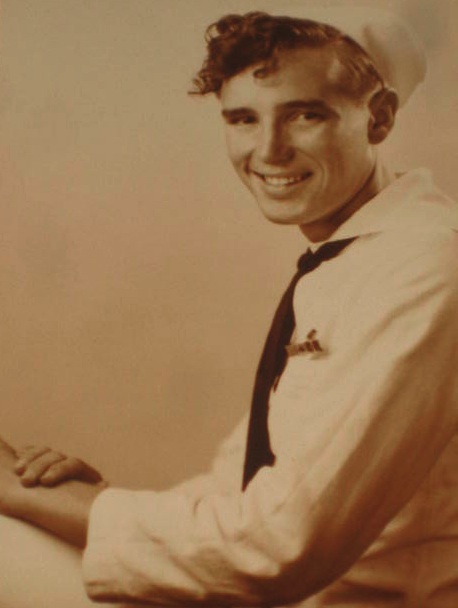 “He never talked about his Navy days, but I tracked down shipmates who shared their memories of him.”

Deanteak‘s late father, who died just last year, received this letter from a World War II buddy in 1990: “May 17, 1945, late afternoon or early evening Buel Dean Keane and I, serving in the U.S. Navy, were aboard the U.S.S. Douglas H. Fox, D.D. 779. We were on radar pilot duty. At the time, we were attacked by several kamikaze suicide planes. How many, I can’t remember.

“One plane dove almost straight down at the ship. As he came down his left wing hit the radar screen. The bomb he was carrying broke loose and hit mount 2. We had quite a few casualties both injured and killed; others died later. I can’t honestly say what happened to Buel when the 5-inch mount exploded because my injuries were severe enough I was unconscious till I woke up on a hospital ship 100 miles from the place of attack.”

In all likelihood, Buel reached out to his old friend to let him know he survived the assault. 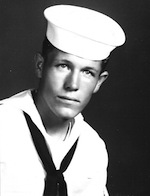 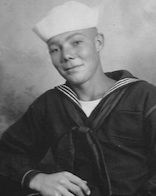 Ttomtucker comes from a long line of proud Navymen. Herwer, who’s been kind enough to give us insight on World War II sweetheart jewelry, posted his brother Fred’s 1958 basic photo (above, left), a picture of his dad John taken in 1942 (above, center), and his grandfather George’s basic photo from 1917 (above, right). 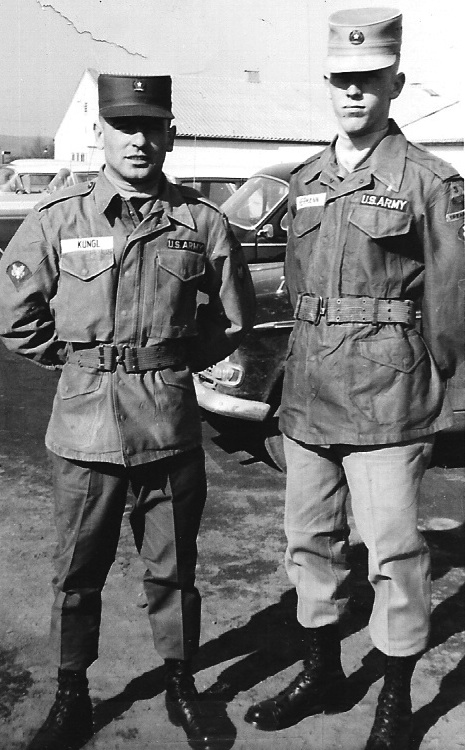 However, ttomtucker himself served in the Army in the ’60s. In this post, he’s pictured with his buddy Marty (above, left), both in block caps. He says it wasn’t so bad being stationed in Germany; in one of the photos in the post, he’s having a lovely night on the town in Lich. 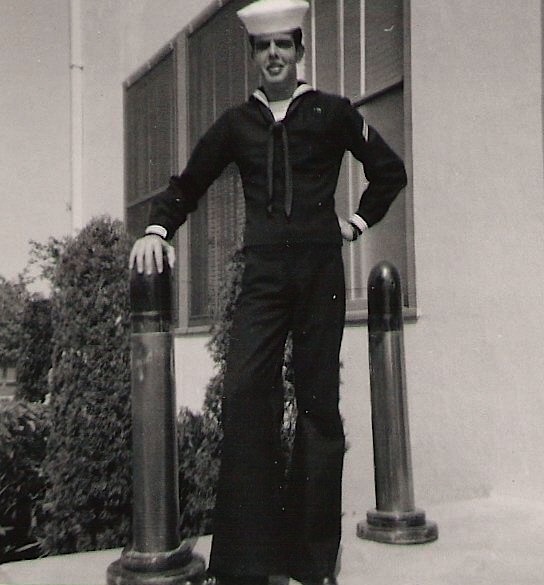 SMD‘s father was yet another World War II sailor looking sharp in his dress blues. She writes, “My father enlisted in the Navy straight out of high school in 1957. After Basic Training he reported to the USS Tom Green County, LST 1159 in the Pacific. He was honorably discharged on September 22, 1963.

“Dad passed away in 1997. He never talked about his Navy days, but after his death my mother passed along photos and documents from his time spent in the Navy. I put it all together in a scrapbook, and even tracked down some of his shipmates who shared their memories of him with me.” 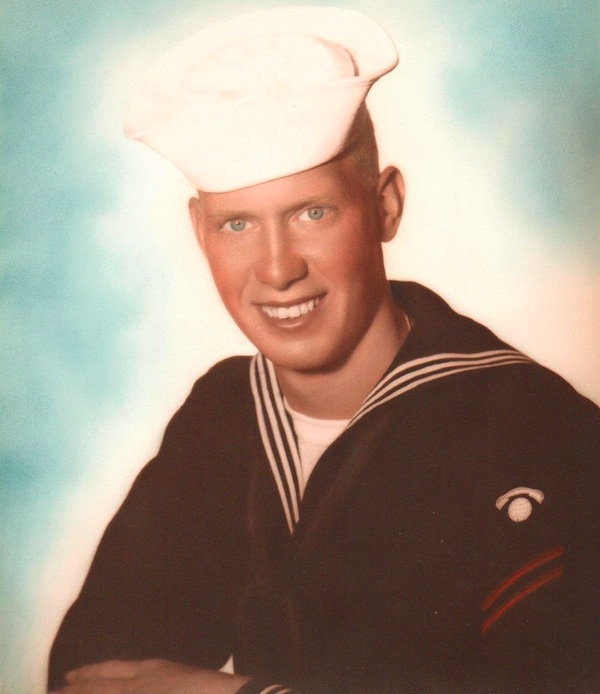 Pop_abides also served in the Navy, starting in the ’60s. He says, “This is one of ‘those’ pictures done just outside of the main gate at Naval Training Center San Diego. I got it and had it sent home after graduation and before I got to my next duty. I wanted to be an IC man (Internal Communications Tech), but was sent to the Repair Division on the Forrestal without a hope of going to ‘E’ Division. So I became a Damage Control man.”

(Have you posted a veteran-related Show & Tell that we missed? Please share it in the comments!)

Tokens for Sweethearts, in Times of WarWar and Prosthetics: How Veterans Fought for the Perfect Artificial Limb