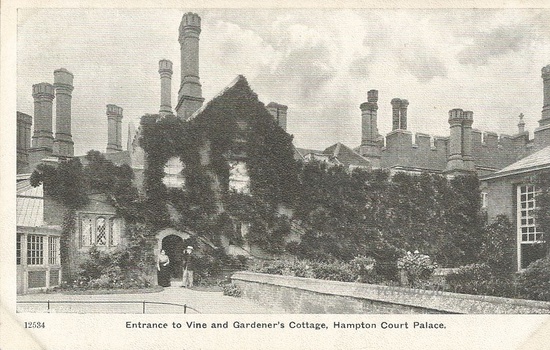 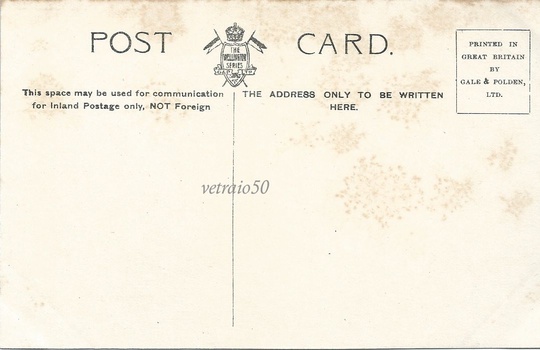 Septimus and Clara Miller visited England in 1906 as part of the Grand Tour. This is the last of the Hampton Court cards that they gathered on their visit. It is another of the cards on the gardens attached to the Palace. However it does not show 'the Vine' but rather the Gardener's Cottage.

'The Vine" is housed under glass. If you look carefully at the photo you will see the sloping roof of the glasshouse at the left of the photo. Within this structure is the grapevine that was planted by Lancelot 'Capability' Brown in 1768 from a cutting taken at Valentines Mansion, in Essex. In 1887 it was already 1.2 metres (4’) around the base. It is now 4 metres (12’) around the base and the longest rod is 36.5 metres (120’).

This is the oldest and largest known vine in the world.

The care of the vine is in the hands of the 'Gardener at Hampton Court'.

In 1904, a new glasshouse and heating system was introduced, which included a viewing area for the public.

What interested me were the two people in the photo: the woman at the door and a man to her right. I have a theory that they were the 'Gardener' and his wife Elisabeth.

There was accommodation for those that held the position too!

The records have it as Apartment 58 aka Vine House – Home of the Vine-Keeper.

The Vine-Keeper from 1884 to 1916 was Mr James Jack. The 1891 census has James Jacob Jacks [sic] living in the ‘Gardeners residence in the Private Gardens’ with his wife Elizabeth S (b 1847), two sons and three daughters.

When James Jack retired he gave an interview to The Straits Times, 11 March 1916, Page 9:

"He went to Hampton Court after having worked for Rev Arthur Pakenham a nephew of the Iron Duke. The vine was then 116 years of age. It was planted in 1768 by “Capability” Brown, the famous landscape gardener of the eighteenth century. Thirty two years ago the vine was in a very poor way. It is now one of the finest in the kingdom. And the oldest under cultivation in England. All that is left of that tree that Mr Jack found at the palace is a short thick stem and one very low limb. The roof is now wood since I came. And this roof stretches in wide perfectly trimmed squares, eighty feet by twenty sic the whole length and breadth of the house. In the summer it looks like a house of vigorous young vines. The foliage is beautiful. ….

The vine was in the old house when I came and in those days the public was allowed inside. The doors were always open and it was exposed to every draught. The dust and traffic were very much against grape growing. For many years moreover it had bee very much over-cropped and all that it was producing or could be expected to produce under such conditions, was a lot of very small bunches.

As Time went on it was cropped much more lightly, and it commenced to improve both in vigour and in the production of larger bunches of grapes. Nine or ten years ago the new house was built, new sol was put in and it was treated as a vine should be treated. The change proved thoroughly beneficial.

The vine now bears fine grapes of good flavour and colour. It is still lightly cropped, the number of bunches sent to the Jing at Windsor every year being rather more than 200. Many of these bunches are sent by his Majesty to various hospitals.

The grape is the old black Hamburg, one of the finest black varieties. Some years ago twelve bunches were shown at an exhibition of the Royal Horticultural Society and were awarded the Hogg memorial medal for special excellence in culture. Two of the bunches weighed 3lbs 14oz each and the whole twelve weighed about 42 lbs an average of 3 ½ lbs each. It was said of them at the time by experts that it was astonishing that such really superb bunches, so massive, having such fine berries, and so finely coloured – as black as sloes – should have been grown on a vine 140 years old.

World wide interest is taken in the vine Mr Jack added. All classes of people from all nations have been to see it. They are keenly interested in its age as well as in the fact that it belongs to the King.

An America visitor once doubted that it was five feet in girth at he ground. I said to him ‘You come and see’. He got a piece of string and found the measurement correct. There is a great bump at the back of the stem that is not seen as the public look at the vine through the glass windows of the porch, and he probably had not reckoned for it. A foot above the ground level the girth diminishes to 4 feet 7 inches.

Mr Jack does not remember any visit to the vine from either Queen Victoria, King Edward or King George, but possibly, he said, “there have been Royal visitors, peers as well as peasants, and I have not known that they were here.” Four years ago Mr Jack was just half the age of his vine, and today, though he is retiring through age, he still looks as robust as his interesting charge."

Black and white post card photograph of Queen Mary's Bower, Hampton Court Palace, no. 12534 by Gale and Polden Ltd., London, Aldershot and Portsmouth. The post card is undated and unused, but others in the same series 'The Wellington Series' appear to date from circa 1900.