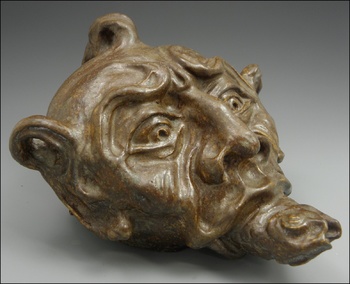 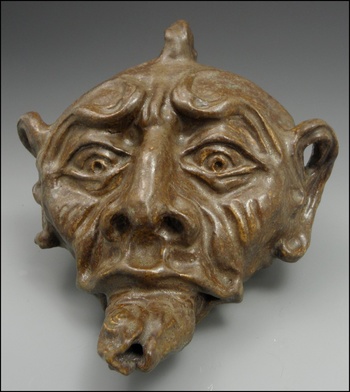 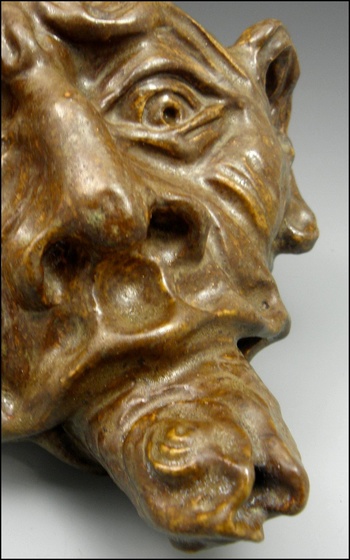 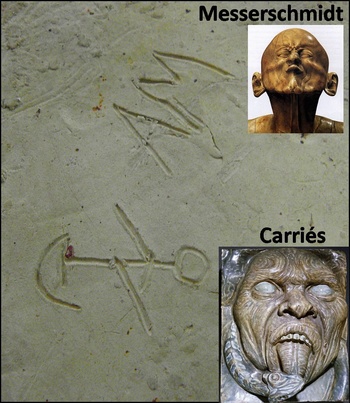 Brown enamelled stoneware. 9" wide by 11" long by 4" high. Inscribed artist's cipher and also the initials "AM" for André Minil. Circa 1900. As with my last post, Abbé Pierre Pacton, was also a member of the School of Carriès "Ecole de Carriès". Click on photos to enlarge, see better detail.

Parish priest turned master potter, Pacton (1856-1938) lived in the town of Arquian, in the heart of one of the most important pottery areas in France.

Pacton was among a number of notable artists who were greatly inspired by the magnificent creations of Carriés (1855-1894).

Pacton created remarkable organic forms, favoring a restricted palette of earthy colors like brown, beige, ochre, and green. Some of his work featured zoomorphic forms, such as monstrous fish, monkeys, lizards, and frogs.

Pacton produced little and was the only member of the Ecole de Carriès who never participated in exhibitions, preferring to offer his creations to collectors who visited the small museum in his presbytery.

André Minil (1883 – 1961) was a friend of Pacton, a collaborator on carved pieces and a carpenter by trade.

This example may have drawn inspiration from the horror masks of Jean Carriés (see last photo). Carriés was hard at work on his unfinished masterpiece, “Monumental Door”, when he died. When finished, it would have been a giant door sculpted with endless grotesque faces and misshapen figures. It was commissioned by the prince/princess of Scey-Montbéliard, French royalty - I believe.

Carriés may himself have been inspired by the work of Franz Xaver Messerschmidt (1736 – 1783). Messerschmidt, once assistant professor of sculpture at the Imperial Academy of Vienna, was also described as a necromancer/occultist and a recluse (see last photo).