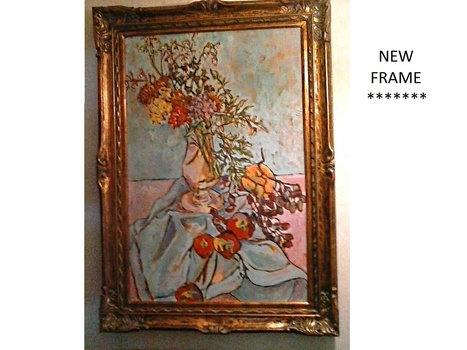 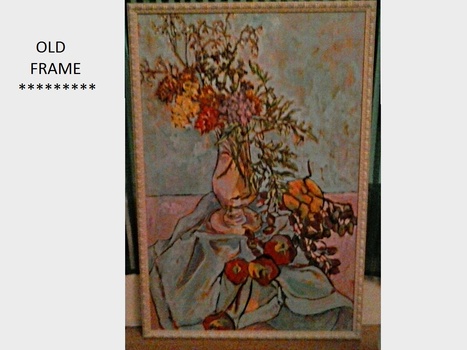 I finally got around to the frame swap for this painting. I found this particular frame at Goodwill with a painting already in it awhile ago and I knew it would fit Rita's painting perfectly. It was a Venetian canal scene that was actually quite nice but it was just a commercial type painting. I'm sure this frame is worth much more than the painting that was in it. It's beautifully carved and gilded and I think it looks amazing. Removing the ugly white frame was a chore. Lots of staples glue and clamps holding the canvas to that little frame. It actually had warped the stretcher and a couple of the plastic splines had fallen out of one of the upper corners at some point. There were also a few dents in the canvas from other pictures at Salvation leaning against it. No paint loss though. A trick I learned was to just lightly mist the back of the canvas with warm water and it tightens right back up as it dries completely removing any sags or dents. A sent Rita a picture and she was as pleased as I am with the results. -Mike-
Below is her reply to my first e-mail

Hi Mike,
12/31/2015
Yes, it's mine. It's an original oil and it was painted over 30 years ago. I don't have a photo of it. Could you send me one? It might be the one with grapes? I usually put my signatures along the sides of cloths or whatever angle there is in a painting rather than on the bottom right and it becomes part of the painting. I used to show at Bay Arts and sold some through there. Another one of mine was found in Luchita's Restaurant, and I discovered that it was sold at a garage sale. Thanks for letting me know about this one. How humbling! I would price this painting today at $800. Thirty years ago, my prices were very low so maybe the original owner resold it. Looks like whoever bought it put on their own frame as my frames are just hand-made strips. A museum style or antique frame would be good. It would also work with a contemporary light wood frame. Look for the signature along the cloth on the bottom when you take the frame off.
Rita

I seem to find the best art work at Salvation on half price day.That's probably because they really load up the store so everything gets cleared out to make room. This was not included in the sale however only items that have been there at least a week. I really wanted this painting regardless of the steep price. A beautiful large impressionist (Matisse-like) still life in bright bold colors. I didn't see a signature on the front but there was a title label on the back with a circular star sticker over most of the name. Also part of an address label that had the name torn off. I lifted just enough of the sticker to see the last name so I didn't damage the label. I borrowed my friends phone and searched the name. Turns out she is a well known Cleveland artist who even has her own website and has been featured in quite a few local galleries and exhibitions. I figured I could find a ball park price for the work on her site but none of the paintings have prices, They are either marked "sold" "available" or "print available". I finally decided to carefully remove the sticker on the label and low and behold it was covering the $500.00 price below the title.... Score ! -Mike-

I strive for a dynamic relationship among color, line, shape and space, and I am interested in patterns of color which I weave into my paintings. I work in oil on canvas because I love the buttery fluidity of oils and the give of the canvas, and I draw with my brush as I like the calligraphy of the first stroke. My paintings are a colorful celebration of ordinary, everyday life, and my inspiration comes from our daily surroundings, whether it is nature, architecture, still lifes or people.
A native of Cleveland, Ohio, I have spent most of my life in the area, and attended the Cleveland Institute of Art from 1985 through 1990.
I have shown in many exhibitions and competitive shows including solo exhibits at Kendal at Oberlin, Solon Center for the Arts in Solon, Ohio, Dobama Theater in Cleveland Hts., Ohio, Malvina Freedson Gallery in Lakewood, Ohio, and the Gallery at Vase to Vase in Lakewood, Ohio. I was accepted in The Butler Institute of American Art National Midyear Painting Exhibition, Ashland University National Juried Exhibition, and in Ohio State University, Cuyahoga Community College, and Cleveland Clinic juried exhibitions. One of my paintings is part of Sherwin Williams' mural in the West Bank of the Flats in Cleveland, Ohio. Two of my paintings are currently on exhibit at the State of Ohio Governor's Office. My work was published in Cleveland Galleries guide of Cleveland Magazine; 52 Weeks 52 Works calendar of Academy Graphics Communications, Inc.; and MUSE Magazine. My work was also seen at Case Western Reserve University, Ursuline College, City Artists at Work exhibitions, Artists Archives of the Western Reserve exhibitions, and as Artist of the Week on Channel 8 TV News.