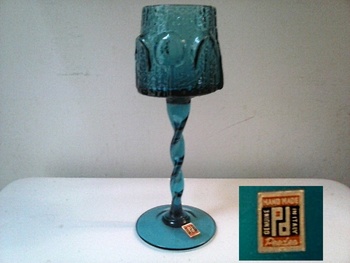 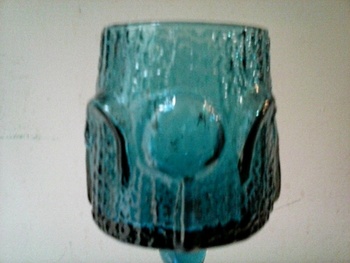 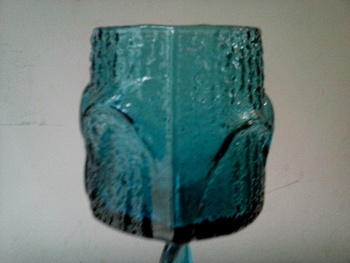 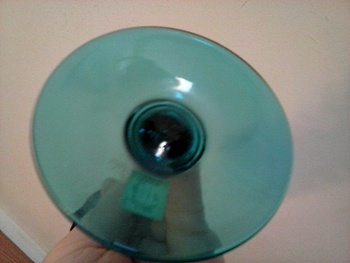 One of today's finds from Salvation is this nice Sapphire blue votive candle holder that still has it's original Italian Peedee Glass export label. I suppose they could be used as goblets too. The 1960’s Medieval inspired art glass holder was created in three different sizes. 10.25", 8.5" and 6.25" and attributed to Wayne Husted who was Blenko's leading glass designer. Wayne was hired by Blenko in 1952 . After leaving Blenko Art Glass in 1963, Husted created this design for a line of glassware for the Stelvia Glass shops in Tuscany which were also exported by Peedee of Italy. The pattern is called “Antiqua” and appealed to the popular Medieval decor rage of the early 1960’s. Now I just have to find the large and small versions to complete the set. -Mike-

Stelvia, or S.T.E.L.V.I.A. (full name Società Toscana Esercizio Lavorazione Vetri Industriali e Artistici, was established in the 1950's, in the region of Empoli, near Florence, Italy. Production concentrated mainly on colourful blown glass vases, jugs and other tableware. Wayne Husted, a well known designer for the American firm Blenko, is known to have produced some designs for Stelvia. The company is believed to have closed in 2001 or soon after.

Wayne Husted was the most prolific Blenko designer and is often credited as the most talented and popular of the Blenko designers. An article in the April 2004 edition of the respected Journal of Antiques and Collectibles says Husted was "both a maverick and an innovator who cemented Blenko's place in glass history."
At an average of at least 60 designs a year during his ten years with Blenko, Husted created over 600 designs. However, The Blenko Project will include only two recent groups of Husted's designs: 'The Olana Group" created for Blenko in 2001, and three creations from Husted's current work titled "The Beyond Olana Group."
Olana is the name for a group of eight designs he created for Blenko in 2001, while he was back in West Virginia for the first time in forty-one years. Husted created a plethora of pieces when he returned after so many years, but his official reason for returning was to be interviewed for Blenko's video "Blenko Retro: The Story of Three Designers," made for public television.